DOHA, Qatar - Caribbean athletes marched into one of the world’s wealthiest nations and left with a rich haul of medals.

The United States topped the WCA medal table with 29, including 14 gold, 11 silver and four bronze. Jamaica finished third. Cuba was tied for 12th, The Bahamas placed 15th and Grenada 17th.

The Caribbean’s medal haul began on Day 2 of the 10-day meet when Jamaica’s Tajay Gayle won the men’s long jump with a world leading leap of 8.69 meters. Cuba’s Juan Miguel Echevarría, who entered the competition ranked number one in the world, finished third with 8.34 to earn bronze.

Jamaica’s podium push gained momentum the next day, picking up two more medals. Shelly-Ann Fraser-Pryce, competing at her first global championships in over two years after having a child, re-established herself as the world’s fastest woman by winning 100 meters gold in a world leading time of 10.71 seconds.

Steven Gardiner snatched the Caribbean’s other gold on the track by winning the men’s 400 meters in a Bahamian national record 43.48 seconds. Gardiner, who finished second in the event at the last WCA in 2017, said he was inspired by personal ambition, support for his team and compassion for his nation, which was devastated by Hurricane Dorian early September. 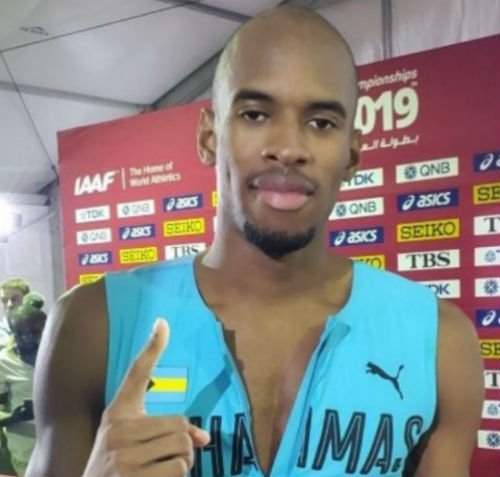 The Bahamas’s Gardiner was number one in the 400 meters. Photograph by Gordon Williams

“I went through each day and I can’t believe I am a world champion,” Gardiner told reporters. “I was born in the Caribbean … It feels pretty good … We did it for our country.”

The Caribbean’s other gold medals came from field events. Cuba’s YaiméPérez won the women’s discus with a throw of 69.17 meters, while Grenada’s Anderson Peters won the men’s javelin, throwing 86.89 meters.

Jamaica also snatched silver in the 4x400 meters mixed relay - each team with two men and two women - beaten into second place by a world record run by the U.S. The Americans clocked three minutes 09.34 seconds. Jamaica was timed in a national record 3:11.78. Jamaica’s men also won silver in the men’s 4x400, clocking 2:57.90 behind the U.S., which won in a world leading time of 2:56.59.

FedrickDacres earned another silver for Jamaica in the men’s discus with a throw of 66.94 meters, second to Sweden’s Daniel Stahl (67.59). Dacres’s compatriot Danniel Thomas-Dodd’s throw of 19.47 meters was also good enough for silver in the women’s shot put, won by China’s Lijiao Gong (19.55).

Shaunae Miller-Uibo clocked a personal best 48.37 seconds for silver in the women’s 400 meters, beaten by Bahrain’s SalwaEidNaser in a world leading time of 48.14. Jamaica’s Shericka Jackson finished third in 49.47, also a personal best.

Shanieka Ricketts earned silver for Jamaica in the women’s triple jump with a leap of 14.92 meters. Yulimar Rojas of Venezuela won with 15.37.

The Caribbean closed out the championships with multiple medals on the final day. Danielle Williams picked up bronze for Jamaica in the women’s 100 meters hurdles clocking 12.47 seconds. The American pair of Nia Ali (personal best 12.34) and Kendra Harrison 12.46 finished one-two.