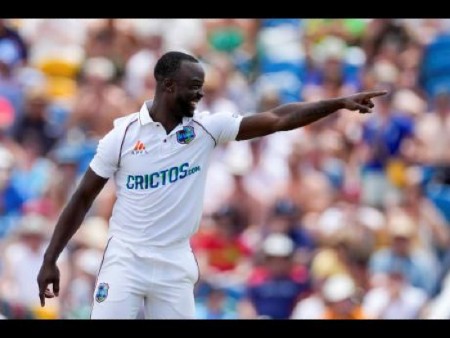 Kemar Roach (right) celebrates after removing England captain Joe Root to move to seventh on the West Indies all-time list of wicket-takers.With his home venue of Kensington Oval providing a fitting stage, the 33-year-old Roach picked up two for 68 to surpass the legendary Sir Garry Sobers – Barbados’ most revered living National Hero – on the all-time list of West Indies wicket-takers in Tests, and assume seventh spot with 237 wickets.

Roach overtook Sir Garry when he claimed his first wicket of the innings, captain Joe Root for 153 in the second over after lunch, lbw to a straightish delivery courtesy of DRS.

Stokes added to West Indies’ woes with a stunning 120 off 128 balls as England, resuming the morning on 244 for three, declared their first innings on 507 for nine, about 25 minutes after tea.

Left-hander John Campbell was an early casualty for four with West Indies on 14 for one but the stylish Shamarh Brooks, unbeaten on 31, and captain Kraigg Brathwaite with a resolute 28 not out, steered West Indies safely to the close on 71 for one in a crucial 57-run, second wicket partnership.

Left-arm spinner Veersammy Permaul, largely ineffective, claimed two late wickets with England on the charge to end with three for 126 while Roach supported with his brace, after also removing all-rounder Chris Woakes for 41.

“It feels good. Obviously to pass a legend like Sir Garfield Sobers is a fantastic achievement …,” Roach said.

“It’s amazing. It’s good to be among the greats. To write my name on the wall above Sir Garry when it comes to wickets is a fantastic achievement so I’m happy for that.”

Roach spearheaded West Indies’ fruitless efforts in the first session as Root and Stokes combined in a 129-run fourth wicket stand which propelled England to 369 for three at lunch.

All told, Root faced 316 deliveries in a shade over eight hours and struck 14 fours while the left-handed Stokes played with gay abandon, hammering 11 fours and half-dozen sixes in just over three hours of box office entertainment.

Arriving at the crease at the start of play following Dan Lawrence’s dismissal off the final delivery of Wednesday’s opening day, Stokes eked out just six runs from his first 24 balls before exploding to reach his half-century off 73 balls with a straight six off Permaul, half-hour before lunch.

After scoring only 39 runs from 13 overs inside the first hour, England gathered 86 runs in the second, Stokes leading a vicious assault on the West Indies attack.

He took a liking to pacer Alzarri Joseph, belting 20 runs from right-armer in the third over before the break, to storm into the 80s and be unbeaten on 89 at the break.

When a rare lapse led to Root’s demise, Stokes added a further 37 for the fifth wicket with Jonny Bairstow (20), en route to his hundred, achieved 40 minutes after lunch with a short single to cover off seamer Jayden Seales.

Once Joseph removed Bairstow to a catch at deep mid-wicket on the hour mark, West Indies enjoyed their best period of the match, with Brathwaite accounting for Stokes with his part-time off-pin, caught in the deep by Brooks in the first over after drinks.

On 482 for six at tea courtesy of a 75-run, seventh wicket partnership between Woakes and Ben Foakes (33), England lost a clatter of wickets following the break as they hunted quick runs.

Left with a ticklish period, there were nerves when Campbell nicked debutant seamer Matt Fisher behind in the second over but Brooks and Brathwaite came together to steady the innings.

With the close beckoning, Brathwaite was given out on 14, lbw to left-arm spinner Jack Leach at 54 for one but a subsequent DRS check showed an inside edge onto the pad.