BRIDGETOWN, Barbados – Cyclist Josh Kelly has gone pro, having secured a one-year contract with the California-based Miami Blazers and becoming the first Barbadian male to be signed to a professional domestic cycling team. 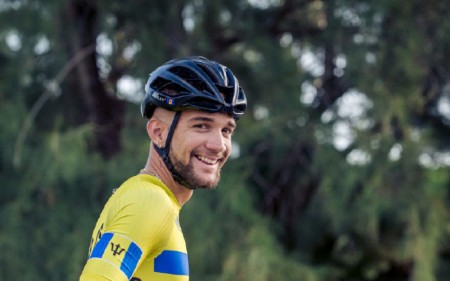 Cyclist Josh KellyThe 26-year-old has joined the team which is about to make a further transition to being a pro continental team, allowing them to enter larger international competitions on the world tour. That will happen in August.

Kelly, who won eight titles in the Barbados National Road Race and National Time Trials between 2013 and 2020 as well as the men’s road race in the Caribbean Championships 2021, said it was a dream come true.

“In any athlete’s career, I think the initial dream is always to go from amateur to pro. However, most of us don’t make it here for whatever reason but it’s a huge deal. Being professional is just a label to most people but for me, it is a mindset.

“I feel like I’ve been a professional in many areas of my life for several years now – in my training, my lifestyle, my diet, and just how I carry myself. The difference now is that I have a much bigger stage to showcase my professionalism. I have the spotlight that I’ve been working relentlessly for,” he said.

The young cyclist added: “My long-term dream still is to represent Barbados at the Olympics in road cycling. In the short term, I’m really looking forward to the 2022 Commonwealth Games and the 2022 Pan American Championships. Also, I’m super excited to be racing the entire US pro circuit and fighting for some of the big titles with my new teammates as the new team on the block.”

Kelly explained how he became part of the 10-member group which was formed in 2021 by Justin and Cory Williams with other cyclists hailing from Venezuela, Anguilla, Guyana, and the United States.

“I met Justin in 2016 when we competed in the same race and I actually crashed quite hard with his brother Cory. We fell out of touch for a bit but then this year we raced again in the Dominican Republic. That renewed our friendship. I beat him and I think that was just what I needed to get my foot in the door,” he recalled.

“He and the others had this vision of creating a new professional team so he reached out to me with the idea and immediately I was interested. I guess I was just in the right place at the right time this year and sometimes that’s all you need to make it to the next level.”

He started training with the team back in January, although the news of him going pro was only recently announced.

Kelly says he hopes his opportunity will inspire other Barbadian cyclists.

“I have a really young brother in the sport and kids like him need inspiration, they need heroes and I’d love to be that ray of light for the younger generation. Coming from an island where people only know about cricket and athletics on the world stage, I really hope this opportunity inspires and motivates others not to give up. As always, any opportunity I have for myself, I always try to keep the door open for others behind me because that’s how we grow. The more professional cyclists we have from Barbados, the better. If I’m able to contribute to that in any form or fashion, I’ll do it without hesitation,” he said.