Jimmy Adams: Chanderpaul a Symbol That Greatness is Possible

ST JOHN’S, Antigua – Former Test captain Jimmy Adams has praised contemporary Shiv Chanderpaul as an icon for future generations, and said he remained in “awe” of the legendary left-hander’s accomplishments during a stellar 20-year career. 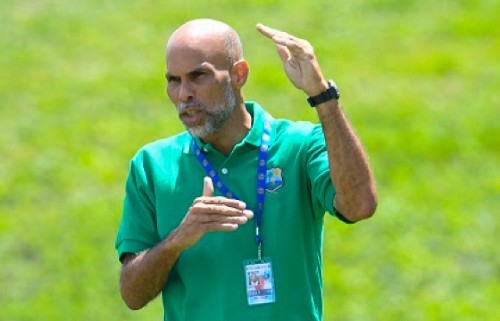 Director of cricket and former Test captain, Jimmy Adams.In a stirring open letter published by the International Cricket Council following Chanderpaul’s induction into the Hall-of-Fame earlier this week, Adams said Chanderpaul’s career had been a story of hardwork and dedication to excellence, adding the ICC award “justifies to you the value of the sacrifices you made”.

“When they picked you as a teenager for that Test in England in 1994, it raised eyebrows, my own included,” said Adams, Cricket West Indies’ current director of cricket who featured in 54 Tests and 127 One-Day Internationals.

“I had never seen you play and there was a sense that you had jumped the queue. Two decades and more than 10,000 Test runs later, it is fair to say, the selectors got it right on that occasion.

“We were roommates for most of my career from that tour onwards and as well as the trust that developed over that time, it’s fair to say you taught me a lot both about cricket as well as life in general.”

He continued: “I think the biggest lesson is that there are no excuses. I look at how you got to the top and stayed there for as long as you did despite all the challenges you faced.

“You are a symbol to kids from difficult backgrounds that anything, including greatness, is possible. I’ve spoken to many youngsters who held you up as a role model and who believed that “If Shiv could do it, I can do it.”

“I hold you up as the example of what can be – the possibilities that exist. You opened my mind up to the fact that if you get a young kid who is willing and tries, never ever put a ceiling on him/her. We all knew you were talented, but if you had said 10,000 Test runs over 20 years…!!!!

“That happened because you adapted and kept adapting and kept working. If you ran into an obstacle, you would seek help and would grow. No one gave you that attitude, it’s something you brought with you wherever you went.”

Chanderpaul, who left international cricket seven years ago and has since entered the coaching arena, plundered 11 867 runs from 164 Tests with 30 hundreds at an average of 51.37, to finish only behind Brian Lara on the all-time West Indies charts.

In One-Day Internationals, he gathered 8 778 runs from 268 matches with 11 centuries at an average of 41.60, to be only behind Chris Gayle and Lara.

Adams said what amazed most about Chanderpaul was his ability to “to set impossibly high standards and maintain them” even amid West Indies’ struggles over the last two decades.

“Your numbers are outrageous and lots of people will focus on them,” Adams continued.

“But what resonates with me is just how much it took me firstly to get to the international stage and secondly how much it needed for me to hang around for 10 years. You did it for 20!!! The effort and the sacrifice just boggle my mind!

“It is hard to quantify just how great your legacy is. You started in a winning team, and along with Brian Lara, as the team became less formidable, your personal contributions got greater and greater.

“It was a reminder that you can even rise above the fortunes of any group if you work hard enough. It is easy to ride on the bandwagon of a successful team, but you were able to set impossibly high standards and maintain them even as the rest of the team struggled.”

He added: “I stand in awe of what you did over 20 years of international cricket. People will never understand how difficult it is.”