LONDON,  – Forest Green Rovers’ promotion hopes were dealt a major blow when their leading scorer, Jamaican Jamille Matt, was stretchered off with a serious hand injury early in Saturday’s English League Two match against high-flying Bolton Wanderers at the New Lawn – a game the visitors went on to win 1-0. 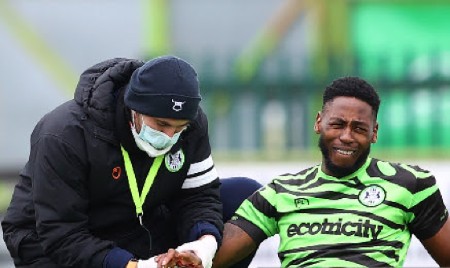 Jamille Matt receives on-field medical attention for his injured hand.Matt, 31, who has scored 16 goals during the current campaign, was taken to hospital, but the full extent of the striker’s injury was unclear after he collided with Welsh defender Michael Williams inside two minutes.

Head coach Mark Cooper said: “He (Matt) sustained a significant hand injury that is going to require some work surgically, but let’s see how that goes before we start to speculate on what’s going to happen.”

Matt’s injury added to Cooper’s frustrations on a day he said his side wasted opportunities to score, but otherwise looked “comfortable, solid”.

He added: “We had two or three really good chances in the first half … our boys at the top of the pitch need to put them away.

“Maybe it’s time for one or two others to step up. I’m getting fed up with the same people missing chances.”

Eoin Doyle, 33, who had “one sniff” in the game, according to Cooper, broke the deadlock with his 16th goal of the season to catapult Bolton above Forest Green in a victory that stretched their unbeaten run to 13 games, as the hosts dropped out of the top three automatic promotion places for the first time since January.

The winner came on 39 minutes after Nathan Delfouneso, who is of Nigerian and Jamaican heritage, beat Baily Cargill down the right to send a pinpoint cross onto the boot of Irishman Doyle, who volleyed home from the center of the box to the bottom-left corner.

One tier below, veteran striker Simeon Jackson – who was born in Kingston, Jamaica, but later played for Canada – helped King’s Lynn Town secure their first victory in nine National League games with a penalty in a surprise 2-1 win over Eastleigh.

Eastleigh, looking to bounce back from defeat to Stockport County last time out, took the lead inside a minute through a Jack Payne free-kick.

Eastleigh piled on the pressure but King’s Lynn weathered the storm and equalized in the 50th minute through Michael Gyasi before the Linnets took the lead with 19 minutes remaining when 33-year-old Jackson slotted home from the spot after he had been fouled in the area by Joe Partington.