KINGSTON, Jamaica – Jamaica’s dominance at the recent 35th CARIFTA Swimming and Water Championships demonstrates that the country can be a powerhouse in the pool, and should serve as further proof that more resources should be made available to these athletes. 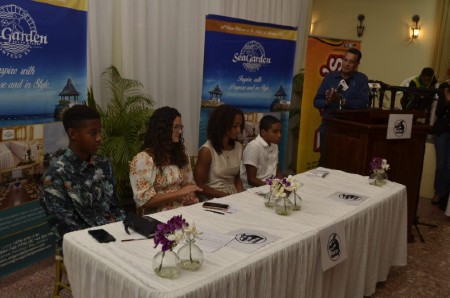 Team Jamaica finished second overall, with a total of 833.75 points behind The Bahamas, which claimed the championship with 975 points. While Jamaica led in the overall medal tally, The Bahamas had the most gold.

Davis said a lot more emphasis and resources should be put towards giving Jamaica swimmers the best opportunity to compete.

“When I watched our swimmers competing at the CARIFTA Swimming and Watersport Championships in Barbados, I said to myself that we could one day [dominate] in this discipline as [we do in track and field],” he said at a reception to honor Montego Bay’s medal-winning quartet of Leanna Wainwright, Leah Chin, Talon Longmore, and Benjamin Davis.

“It is for this very reason, especially here in Montego Bay, that we have to find ways to create the necessary infrastructure where our swimmers can be comfortably trained, so as to continue to compete at an even higher level.”

Davis said seeing Jamaica competing and outdueling the traditional regional swimming juggernauts, such as The Bahamas, the Cayman Islands, and Barbados, was pleasing, adding that the only thing missing was the Jamaica “support delegation”.

“The four Montego Bay swimmers collectively had 19 of those medals. This is why we must give them all the support that is required…. Therefore, we have to get larger pools built for them where they can properly practice. I have spoken to Minister [of Sports Olivia Grange] and I know, along with assistance from corporate Jamaica, some things will be done,” he added.

President of the Montego Bay Chamber of Commerce and Industry, Janet Silvera, said that despite the absence of a proper swimming pool in the western region, swimmers from the island’s second city will continue to exceed expectations.

She said the Montego Bay Chamber will continue to lobby for corporate hands to assist, noting that for the four to garner nearly a third of the medal haul, speaks volumes to their potential and testament as to what “commitment to one’s craft can do”.

Cuba-born head coach, Adolfo Morales, also expressed satisfaction with the west’s involvement and congratulated the swimmers for their hard work and dedication.

“To be able to represent Jamaica at an international level is a great honor and accomplishment and they should be very proud,” he said.