KINGSTON, Jamaica – Jamaican sprinter Shericka Jackson said the postponement of the Tokyo Olympics to this year was also a blessing for her in many ways. 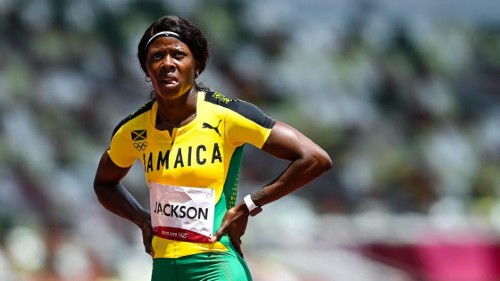 Jamaican sprinter Shericka JacksonJackson, 27, was reflecting on a notable season on the international circuit, where her switch from the women’s 400 meters to the shorter distances of 100m and 200m brought her resounding success.

She completed Jamaica’s Olympic medal sweep by taking bronze in the women’s 100 behind compatriots Elaine Thompson-Herah and Shelley-Ann Fraser-Pryce.

She is only the 10th athlete ever to achieve all three landmark times in the women’s sprints, and only the third since 2000, following American Allyson Felix and Shaunae Miller-Uibo of the Bahamas.

“After the 2019 season, in the November, I did an X-ray and found I was running on two stress fractures,” she said in an interview appearing on the website of World Athletics, the sport’s world governing body. “For me to be here in 2021 is such a good feeling.

“In 2020, I struggled so much. I kept going because I never wanted to take one full year off and not do any activity. It was mentioned about doing surgery, but I never wanted to do that. I had a teammate who did that, and it was good for him, but by observing and listening to him, I just never wanted to be in that position.”

She added: “I stopped competing in August of last year and took some time off. I spent most of the time in the pool. When I found out in November (2019), I never started training again until March, which was a struggle, because at that time they hadn’t yet put off the Olympics.

“I was really worried, I wanted to get back. But when I found out they had postponed the Olympics, it was a really, really good thing for me. I just continued to work on where I was, working with the physio. We did a lot of pool stuff and she helped me so much with the healing. I’ve been to so many physios where it wasn’t working, so for her to work with me it was such a good feeling. I am so grateful.”

Jackson said she was happy to defy everyone’s opinion of her talent and prove that she could be successful over the shorter distances.

“Because I have always run 400, a lot of people don’t actually know how good a talent I am,” she said.  “I am so grateful for this year. This year has led to so many people who never knew, to see I had that talent.”

“It was a fantastic season. I can’t complain. There were ups and downs. There were some lessons that I had to learn. I have learned so much from this year just sprinting. I have run personal bests, won medals, it was a wonderful season for me.”

The only real blot on a memorable season for Jackson came in the Olympic 200, when she misjudged her finish, eased up too much and was eliminated in the heats, but she took a philosophical view of her error.

“I never lost focus and I said, ‘everything happens for a reason’,” she said. “I may not know the reason. I may have a goal that I go into a championship with and the goals that I have set myself, but God may not have planned the same for me.

“So, this year I was able to sprint and run a leg of the 4×400. That was a great moment for me after the disappointment of the 200. Well, I wouldn’t call it a disappointment – it was a lesson I have to learn.”