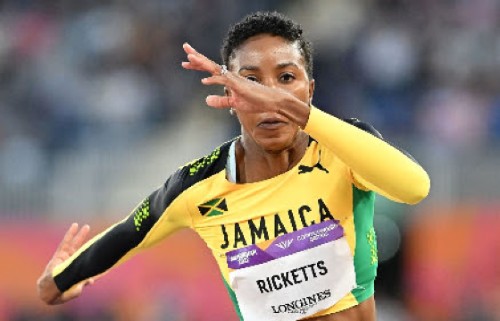 Jamaican Shanieka Ricketts en route to winning gold in the women’s triple jump on Friday.She was joined by Grenadian Lindon Victor who produced another sterling effort to successfully defend his men’s decathlon title, as the Caribbean tasted success in the field events at Alexander Stadium.

The 30-year-old Ricketts, a silver medalist at last month’s World Championships in Eugene, unleashed her winning mark of 14.94 meters on her first jump – also a season-best – while defying chilly temperatures in England’s West Midlands.

Dominican Thea Lafond measured 14.39 to grab silver and follow up her historic bronze at the last Commonwealth Games in Gold Coast, when she became her country’s first-ever medalist at the showpiece.

England’s Naomi Metzger was forced to settle for bronze with a leap of 14.37.

“I definitely knew the girls were coming out here to fight so I had to bring my A-game and [fight] them,” said Ricketts, who won silver in Gold Coast four years ago.

“I like competing in the cold for some strange reason but after the first jump, I felt like it got even colder. The breeze started changing.”

Jamaican Kimberly Williams missed out on a medal when she finished fourth with a jump of 14.25m.

Meanwhile, the 29-year-old Victor completed his conquest in dramatic circumstances when he finished fourth in the final event, the 1500 metres, as Australian Daniel Golubovic – who finished with silver overall – won the event.

However, Victor came away with 8 233 points, edging out Golubovic (8 197) with another Australian Cedric Dubler (8 030) finishing with bronze.

“Ahead of the 1500m I just thought, ‘don’t relinquish the lead – run as hard as you need to win’. And that’s exactly what I did,” said Victor.

On the track, women’s Olympic 200 meters champion Elaine Thompson-Herah surged into Saturday’s final by winning heat three in a time of 22.63 seconds, the Jamaican finishing ahead of Canada’s Natassha McDonald (23.21).

Thompson-Herah, who is bidding for the double after winning the 100 meters title 48 hours ago, will be joined in the final by countrywoman Natalliah Whyte (23.09) who was second behind winner Favour Ofili of Nigeria (22.66) in the opening heat.

In the men’s 200m, Trinidadian Jereem Richards was the lone Caribbean athlete to reach the final after storming to victory in semi-final three in a time of 20.40.

Barbadian Sada Williams will be one of two Caribbean women in the 400 meters final after winning the second semi-final in 51.59, Jamaican Junelle Bromfield finishing fourth in 52.18 to also qualify.

On the men’s side of the event, Barbadian Jonathan Jones led Jamaicans Anthony Cox (45.98) and Nathon Allen (45.99) into Sunday’s final by winning semi-final two in 45.82.