EUGENE, Oregon – Jamaican triple jump silver medalist Shanieka Ricketts is aiming to reach the 15-meter mark before closing out her season, but even in the absence of that, she is confident she is among the top 10 most consistent triple jumpers in the world. 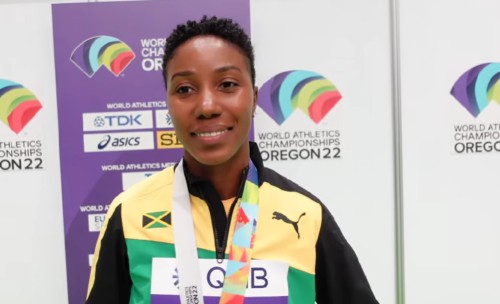 Shanieka RickettsRicketts captured silver at the World Championships on Monday with a season-best 14.89 m – and her fourth-best ever performance – that she said surpassed her usual first-round jumps.

Speaking after the event, she said that after opening with such a big jump, she had anticipated reaching the 15 m mark in her subsequent attempts but several factors, including wind, got in the way.

However, Ricketts said she believes she can reach there before her 2022 season closes, with several opportunities in upcoming competitions.

“Once I execute the perfect jump I will undoubtedly be over 15 m, so I’m just basically continuing training. I have the Commonwealth Games next week, I also have a few Diamond Leagues coming up, so I’m definitely aiming to improve the 14.89 season-best and hopefully I’ll be over the 15-metre mark, God’s willing,” she said.

Ricketts, who won the silver medal at the 2019 World Championships in Doha, said her performance here “puts me basically in the top – I would say – maybe 10 based on consistency”.

“I think the triple jump is a very difficult event and it’s very difficult to maintain consistency throughout the years and I’ve been doing that since 2008. So, I think [this silver medal] would put me in a position where I am among some of the best triple jumpers in the world consistently,” she said.

The Jamaican athlete told journalists that she went into Monday’s final with a plan to go big in the first round and set the pace.

“I think once you get a big jump in the first round, it kind of cushions you, and it also gives you three further jumps in the top eight, so it’s actually a strategy that works,” Ricketts said, adding that she was also focused on improving on her fourth-place finish in the Tokyo Olympics last year.

“That was a huge disappointment. I had some massive fouls which basically ended up in me only finishing fourth. So this year, I wanted to eliminate the chances of finishing fourth again and I just decided to go for it in the first round and to put something big out there so that they could chase and then hopefully I would get something bigger as the rounds progress.”

After playing second fiddle to Venezuelan Yulimar Rojan who posted a world-leading 15.47 m to take the top spot on Monday, Ricketts said she is going after the gold and is also looking forward to competing with compatriots Kimberly Williams and Ackelia Smith, “so that we can do the sweep”.

Williams and Smith also made it into the finals of the event, placing seventh and twelfth, respectively.

“It’s a very good look for triple jump, especially in Jamaica. Ackelia is a freshman in college…so to see her step up and to join me and Kimberly Williams, I think it means that the triple jump in Jamaica is in safe hands,” Ricketts said.