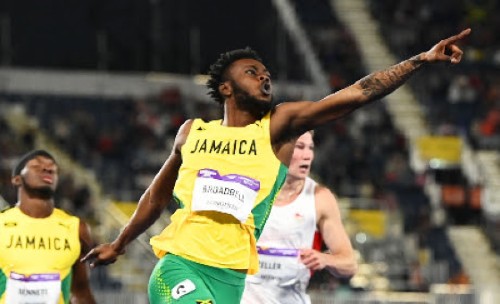 Jamaican Rasheed Broadbell celebrates at the finish of the men’s sprint hurdles on Thursday.Running out of lane six, the 21-year-old stormed to an impressive personal best 13.08 seconds, equaling Colin Jackson’s long-standing mark from 1990.

Barbadian Shane Brathwaite, a finalist at the World Championships in Eugene last month, finished with silver in a season-best 13.30 while England’s Andrew Pozzi clinched bronze with 13.37.

Parchment, the pre-race favorite, was expected to line up in lane three but pulled out of the contest. The Jamaican also sat out the World Championships final in Eugene.

Running in chilly temperatures, Broadbell was away quickly and despite a steady challenge from Brathwaite in lane one, never wavered as he picked up the first major medal of his career.

“I knew I had to stay focused and that is what I did. Sometimes, when you run, you don’t know what is going to happen,” he was quoted as saying.

“You just have to execute properly.”

The success made up for Broadbell’s disappointment at the World Championships when he bowed out at the semi-final stage.

There was also success for the Bahamas when LaQuan Nairn won gold in the long jump, measuring 8.08 meters ahead of Sreeshankar Sreeshankar of India (8.08m) and South Africa’s Jovan van Vuuren (8.06).

Nairn, who turned 26 last week, edged out Sreeshankar due to the fact his next best jump of 7.98m bettered the Indian’s 7.84m.

“Coming in, mentally I was ready to jump,” said Nairn.

Lawrence Okoye of England finished with silver after measuring 64.99m.

In the opening rounds of the 200 meters, Olympic champion Elaine Thompson-Herah of Jamaica continued her bid for the double when she easily won heat five in 22.80 seconds.

On the men’s side of the draw, Jereem Richards of Trinidad and Tobago was the fastest Caribbean qualifier with 20.68 seconds, and was one of nine runners from the region to advance to the next round.