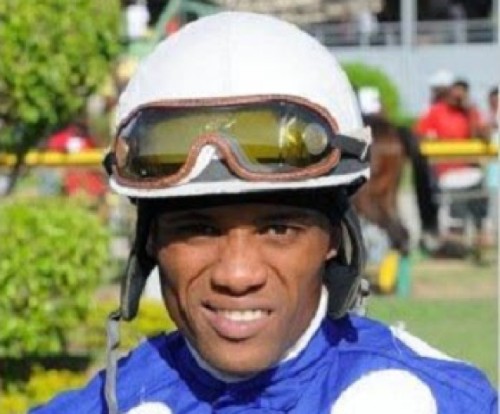 Jamaican jockey Chavion Chow.The 35-year-old, the leading jockey here in 2015, captured race one over six furlongs with favorite Call Me Captain and followed up in another six furlong sprint in race five with victory aboard 2-1 chance In the Deep.

Chow, who missed the last two seasons at Assiniboia, lies third in the current standings behind leader Jorge Carreno on 52, with Barbadian Renaldo Cumberbatch second on 34.

Barbadian Shavon Belle then produced a three-quarter length score aboard 6-1 chance Bettin on Belle in a 5-½ furlong sprint in race six before Jamaican Tyrone Nelson rounded out the day’s card with victory in race seven over 7-½ furlongs aboard the longest shot in the field – 43-1 choice Captive Kitten.

It was Chow who led the charge, however. First, he partnered with four-year-old bay gelding Call Me Captain to edge the three-year-olds and upward by a head after forcing the pace and getting up late.

And his second win came with another bay gelding, the five-year-old In the Deep, this time stalking the leaders before rallying in the stretch and again getting by late to take the wire 1-½ lengths clear.