PORT OF SPAIN, Trinidad – Rovman Powell belted an important six off the third delivery before rain arrived as Jamaica Tallawahs inflicted Barbados Royals with their first defeat, in a six-run win courtesy Duckworth-Lewis-Stern on Thursday. 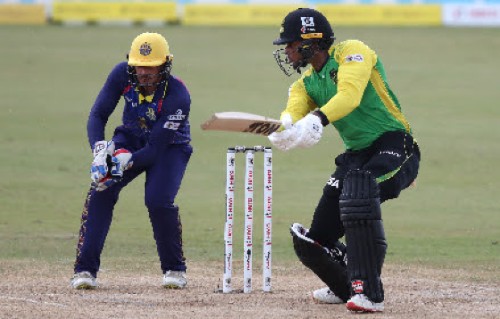 Brandon King cuts during his top score of 46 for Jamaica Tallawahs. (Photo courtesy Getty/CPL)With the weather threatening at Queen’s Park Oval, the franchise captain (12 not out) cleared the ropes at mid-wicket with seamer Jason Holder. A further three runs in the over – the 17th which cost ten – saw Tallawahs move ahead on DLS in pursuit of their target of 147, ending on 126 for five.

West Indies opener Brandon King had earlier struck 46 from 33 deliveries and Amir Jangoo, 29 from 18 balls, to lay the foundation for Tallawahs’ run chase in a 53-run opening stand.

King counted three fours and two sixes while the left-handed Jangoo struck five fours and a six before perishing in the fifth over, holing out to mid-off off left-arm seamer Obed McCoy (2-19).

The right-handed King added another 46 for the second wicket with Shamarh Brooks (18) before becoming one of four wickets to fall for 17 runs in a slide which nearly cost Tallawahs the game.

Holder was behind the damage, knocking over King and the in-form Raymon Reifer (1) in the 13th over before returning to also remove Fabian Allen (1), and end with three for 33.

Earlier, South African Quinton de Kock top-scored with 74 from 43 deliveries but Royals could only muster 146 for six from their 20 overs after being sent in.

Captain David Miller struck 34 from 27 balls but left-arm spinner Imad Wasim weaved his magic with three for 17, to hurt the innings.

Royals were in ruins at 17 for three after six overs after Imad wiped out the top order but de Kock came to his side’s rescue, adding 30 for the fourth wicket with Azam Khan (12) and an important 83 for the fifth wicket with countryman Miller.