EUGENE, Oregon – Caribbean powerhouses Jamaica suffered massive disappointment on the penultimate day of the World Championships when both their sprint relay teams missed out on gold at Hayward Field. 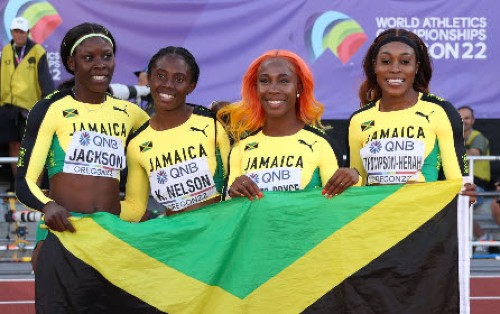 Jamaica’s women sprint relay team after clinching silver at the World Championships. (via CMC)The star-studded women, favorites to top the podium, finished second in a season-best 41.18 seconds behind United States who stormed to a world-leading 41.14 to take gold.

Jamaica’s men, meanwhile, were left empty-handed after finishing fourth in 38.06 as Canada grabbed top spot with a world-leading 37.48, beating the Americans (37.55) into second.

Jamaica will have another stab at relay glory on Sunday’s final day when they line up both the men’s and women’s 4×400 meters finals.

And the signs were there early when Nelson’s hand-over to Thompson-Herah proved less than stellar, leaving the Americans out front and Great Britain in second.

Fraser-Pryce produced a strong third leg but by the time Jackson grabbed the baton, Jenna Prandini had already sent Twanisha Terry on her way.

Jackson unleashed a stunning leg, however, and was gradually closing the gap on Terry when she ran out of time.

“As a team we are grateful for the silver medal because we couldn’t have gotten any [at all].”

Thompson-Herah added: “It was teamwork even though it wasn’t [a] win but we got a silver tonight so we can’t complain.”

Fraser-Pryce, the reigning five-time 100m champion, also said she was grateful for silver even though gold had been the aim.

“As a team, we went out there and the goal is always to get the gold medal but we fell short,” she explained.

“But I think our ladies ran well because at the end of the day, we didn’t put any medals out here. We have to come out, we have to execute and we have to get the stick around, and I’m glad we were still able to stand on the podium.”

Germany sneaked in for bronze after Dina Asher-Smith pulled up on the third leg with injury to deal a blow to Great Britain’s medal chances.

On the men’s side, the team of Ackeem Blake, Yohan Blake, Oblique Seville and Jelani Walker struggled, leaving the United States and Canada to battle for the top spot.

By the penultimate leg, Jamaica were already out of contention and Andre de Grasse produced a scintillating final leg to hold off fast-finishing American Marvin Bracy.