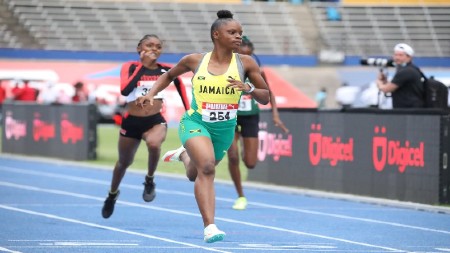 Jamaica's Tia Clayton competing at the CARIFTA Games at the National Stadium in Kingston on Saturday, April 16, 2022. (Photo credit: Marlon Reid)The Jamaicans, teeming with confidence, brought the stick home in a time of 42.58 seconds before a frenzied National Stadium, to eclipse the old mark of 42.94 they established at the World Junior Championships in Nairobi last year.

In the process, the Games record of 44.08 seconds also fell, the girls setting the tone for their Under-20 boys counterparts who clocked 39.15 to lower an eight-year-old championship mark.

“It’s a very overwhelming feeling. Competing with such talented young ladies, I think we did an excellent job,” said Brianna Lyston, who ran the all-important third leg.

“The only thing that was going through my mind was getting the baton around safely because we’re from different schools and the changes are kind of new and I’m just happy we managed to do it.”

Serena Cole gave Jamaica a lightning quick start and by the time she passed to World Under-20 champion Tina Clayton on the second leg, it was evident the clock was the home team’s only rival.

Lyston produced a dominant curve and when Tia Clayton collected the baton on the final leg, there was not a single challenger in sight.

She streaked through the final meters, glancing left at the clock as she crossed the line, and breaking into celebrations.

Barbados trailed in second in 45.36 while Trinidad and Tobago clinched bronze in 46.12.

The boys followed suit, Bouwahghi Nkrumie handing off to Bryan Levell before newly crowned champion Deandre Daley stormed through the third leg to open up a healthy lead on the field for his side.

For the second time, Jamaica found themselves alone on the final 100 meters, Sandrey Davidson carrying the hosts to a comfortable win and a new CARIFTA mark.

Earlier, Jamaica captured the girls Under-17 sprint relay in 45.38 seconds with the Bahamas clinching silver in 47.13 and Trinidad and Tobago finishing third in 48.19.

In the boys equivalent, the hosts stopped the clock at 41.74, the Trinidadians following them home in 42.77 and the Cayman Islands crossing the line in 43.40 for bronze.

“I came out here to deliver for my country,” said Camoy Binger, who ran the backstretch for Jamaica in the girls event.

“I didn’t medal in the 100 meters. I felt bad but I just shake off the bad energy and came out here to deliver.”

Jamaica had earlier established their dominance, winning three of the four 400 meters hurdles finals, Michelle Smith of the US Virgin Islands stealing the girls Under-17 event in 58.61 seconds to prevent the hosts from making another clean sweep.