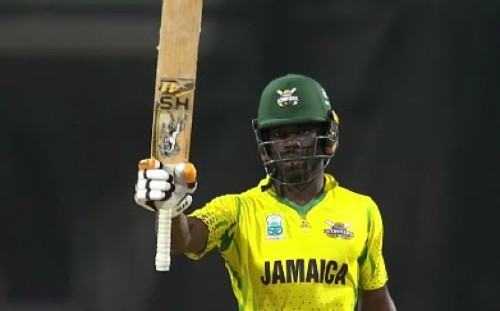 Chadwick Walton celebrates his half-century in Saturday’s final of the Super50 Cup.Simply cruising at 150 for one in pursuit of 218 for victory in the day/night final at the Vivian Richards Cricket Ground, Scorpions suddenly lost their way once Chadwick Walton (80) and Andre McCarthy (55) perished within 17 balls of each other with five runs added.

In fact, six wickets tumbled for 60 runs and when Peat Salmon (11) had his stumps shattered by left-arm spinner Khary Pierre (2-42) at the start of the 47th over, the game was wide open with Scorpions tottering on 210 for seven.

However, Jeavor Royal (one not out) pinched a single to short third man to turn the strike over to big-hitting all-rounder Odean Smith, who smashed the fifth delivery over long off for six to level the scores.

Smith (13 not out) then skied the final delivery into vacant cover to end Scorpions long-running title drought and deny Red Force a second consecutive championship.

“I’m really excited right now. Odean Smith, I thank him very much for hitting that six – it released a little pressure,” said an overwhelmed Royal, the youngest member of the squad at 23.

“It’s a very good feeling. For not winning the championship for so long and coming and winning it this year, it’s a very great feeling.”

Sent in, Red Force buckled for 217 also off 47 overs, their batting failing to turn up after their impressive effort in last Wednesday’s semi-final when they surpassed 300 with ease.

Left-hander Yannic Cariah, batting at number six, top-scored with 43 from 45 balls with two fours and two sixes, combining in a crucial 56-run, sixth wicket stand with Akeal Hosein who lashed four fours in scoring 37 from 52 deliveries.

Kjorn Ottley had earlier scored 33 from 51 balls with a four and a couple of sixes, helping to post 46 for the first wicket with fellow left-hander Amir Jangoo whose 23 came from 36 balls and included four fours.

Jangoo’s demise, pulling captain Rovman Powell to backward square in the 13th over, sparked a slide that saw four wickets tumble for 33 runs and left the innings stuttering on 79 for four in the 22nd over.

Red Force’s hopes rested on captain Nicholas Pooran but after surviving a chance on three when he was caught at short mid-wicket off a Smith no-ball in the 25th, the left-hander slashed at a short delivery in the bowler’s next over and edged behind for eight.

Cariah and Hosein then carried the innings before the last four wickets went down for 33 runs, new ball pacer Nicholson Gordon returning to finish with three for 51.

With Scorpions requiring just over four runs per-over, in-form West Indies opener Brandon King perished cheaply for 12 in the sixth over when he gloved a leg-side catch behind, pulling at a short ball from speedster Shannon Gabriel with 24 on the board.

The setback was temporary as veterans Walton and McCarthy batted superbly in a 126-run second wicket partnership to put Scorpions in command.

Walton, 37, faced 94 balls and punched eight fours and two sixes while McCarthy, 35, counted three fours and a six in an 88-ball knock.

The breakthrough came at the end of the 32nd over when Walton sliced leg-spinner Cariah to point and McCarthy followed soon afterwards when he hoisted left-arm spinner Hosein into long on’s lap in the 35th over.

The plot thickened even further when Alwyn Williams (3) holed out to deep mid-wicket in the 39th and seamer Terrance Hinds claimed Powell lbw for 25 and yorked Dennis Bulli (2) in successive overs but Smith eased the tension to take Scorpions over the line.