NORTH SOUND, Antigua – Jamaica Scorpions beat West Indies Academy in the final Super50 Cup group stage game made messy by rain, to finish top of Zone B and book their spot in the semi-finals. 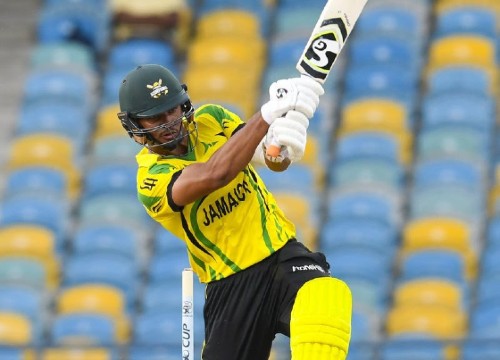 Brandon KingAsked to chase a revised target of 146 from 34 overs under lights here Monday, Scorpions were 125 for four in the 27th over when the pesky weather that plagued the game from the start, returned for the final time to end the contest prematurely and hand them a 23-run victory under Duckworth-Lewis-Stern.

Opener Brandon King top-scored with 48 from 55 balls with five fours while captain Rovman Powell had clobbered two fours and two sixes in an unbeaten on 26 from 25 balls, when the match ended.

Sent in earlier, West Indies Academy were dismissed for 175 in the 40th of an encounter initially reduced to 48 overs per side due to a delayed start at the Vivian Richards Cricket Ground.

Kirk McKenzie hit 45 from 57 deliveries at the top of the order but Kevlon Anderson (21), Ackeem Auguste (21), Joshua Bishop (20) and captain Nyeem Young (20) got starts only but failed to convert.

The innings was hurt by three-wicket hauls from off-spinner Jamie Merchant (3-35) and fast bowler Nicholson Gordon (3-40) while another off-spinner Peat Salmon weighed in with two for 33.

There was no stellar start for the Academy, Merchant striking twice to send the innings crashing to 36 for three in the 10th over before McKenzie counter-attacked with four fours and three sixes in a 40-run fourth-wicket partnership with Anderson.

When McKenzie edged a defensive prod at Merchant and was caught at the wicket in the 18th over, the innings all but fizzled out, Auguste and Carlon Bowen-Tuckett (14) putting on 28 for the sixth and Young and Bishop adding 25 for the eighth wicket to squeeze out precious runs late on.

Scorpions then lost Chadwick Walton cheaply for one with two on the board in the second over from speedster McKenny Clarke but King added 38 for the second wicket with Andre McCarthy (17) and a further 45 for the third wicket with Alwyn Williams (20) to keep the run chase going.