BIRMINGHAM, England – Jamaica’s Sunshine Girls stumbled at the final hurdle in their quest for Commonwealth Games gold, slipping to a 55-51 defeat to World number ones Australia here Sunday. 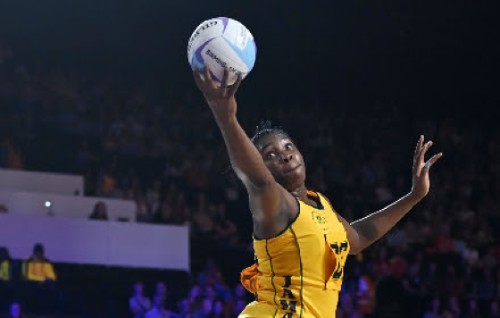 Veteran Jhaniele Fowler led Jamaica’s attack.Locked 29-all with the Diamonds at half-time at the NEC Arena, the Caribbean powerhouses suffered a third quarter meltdown and their final quarter comeback failed to gather enough steam to overcome the deficit.

“We came into this tournament with a mindset to win and with that mindset, it brought us to the final.

For the Jamaicans, goal-shooter Jhaniele Fowler led with 46 goals from 47 attempts, finishing the campaign on the same high in which she started.

Gretel Bueta was the inspiration for Australia, shooting a perfect 37-from-37 while Cara Koenen supported with 15-from-15.

“It was a ripper of a game,” Bueta said.

“Jamaica are growing and growing with every outing, so they pushed us to our limit.”

The previously unbeaten Sunshine Girls, who only last week defeated Australia in a group stage game, found themselves down 12-14 at the end of the first quarter but out-scored their rivals 17-15 in the second quarter to produce a deadlock at half-time.

However, things fell apart for the Jamaicans in the next quarter, Bueta and Koenen combining to hurt the Caribbean side as Australia got the better of the exchanges, 16-10.

Down 45-39 at the start of the final quarter, Jamaica threw everything at the Aussies but the deficit proved too much to make up in the end.

In the bronze medal game, New Zealand came away with a 55-48 victory over hosts England.