KINGSTON, Jamaica – General Secretary of the Jamaica Football Federation (JFF) Dalton Wint is set to step down, the organization said, on the heels of a series of foul-ups that prompted players to threaten not to play until he resigned. 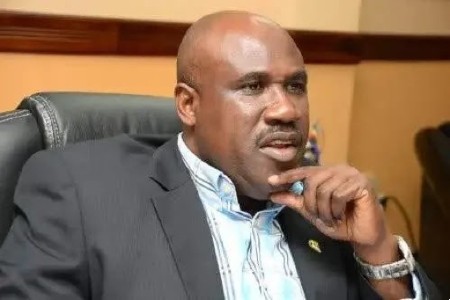 Dalton WintIn a brief statement posted on its Facebook page late on Monday, the JFF said that Wint had given his “unequivocal and irreversible commitment to submit his resignation from the post”.

“The Board of Directors of the JFF look forward to receiving same soonest. Other relevant information regarding this matter will be shared with the country in the coming days,” it added.

he development follows the Reggae Boyz Concacaf Group A Nations League match in Suriname last Saturday. They were originally to be back in Jamaica on Sunday but only arrived on Monday.

Minister of Sport Olivia Grange confirmed Monday that she was advised that travel arrangements for their return had been cancelled and her assistance was sought. She was able to get the men back in time for their return match against Suriname scheduled for Tuesday evening.

Expressing discontent at the constant “lack of respect, transparency, and communication” from the JFF hierarchy, the players called for Wint to go and threatened not to play until he resigned.

In a statement issued on social media on Sunday when they said they were still awaiting confirmation of their flight back home, even as they learned Suriname’s team would arrive in Jamaica before them, the players said the travel debacle was the proverbial straw that broke the camel’s back.

They alleged that in addition to the flight situation, players Shamar Nicholson and Ravel Morrison did not join the team in Suriname because of poor travel arrangements and hotel accommodation in Suriname had them sleeping on couch beds.

“We are drained. We are tired. Enough is enough,” the players said.

“This has been another example of the incompetence displayed by the leaders of the JFF…. ‘If you fail to prepare, you’re prepared to fail’. This has been our reality as Reggae Boyz for far too long. We haven’t been prepared to be successful and when we’re not, we the players get all the blame, when, in fact, it’s more than just what happens on the field. Time and time again, the JFF shows us that they don’t care about the players or the state of Jamaica’s football.”

The players added that despite not being paid for months, and breach of their contract with the JFF “multiple times”, they continued to represent their country.

“There’s nothing like representing Jamaica on the international stage, meeting up with our teammates, coming home to see your family and friends and playing in front of the fans at the National Stadium. However, that love, passion and excitement [are] being drained from the constant lack of adequate leadership from the JFF,” the Reggae Boyz said.

“We the players are saying ‘enough is enough’. We need a change. We need better leadership. We are calling for the General Secretary Dalton Wint to resign. The players will no longer represent the country until he does,” the statement ended.

There have been local reports that head coach Paul Hall could also hand in his resignation.

However, when questioned at a virtual press conference on Monday, he would only say that he would be there with the team for Tuesday’s game.

“All I know is that I will be there on the sidelines, giving my all because that’s what we do. It is really important that everybody is behind this team tomorrow, we know how important it is for Jamaica’s football, so, yes, I will be there tomorrow 150 per cent,” Hall told reporters.

He urged supporters to attend Tuesday’s match at the National Stadium and “show us that they’re on our side”.