EUGENE, Oregon – Jamaica men’s and women’s 4x400m relay teams, and 100m hurdler Brittany Anderson all copped silver on the final day of the World Athletics Championships on Sunday, to bring the island’s final medal count to 10. 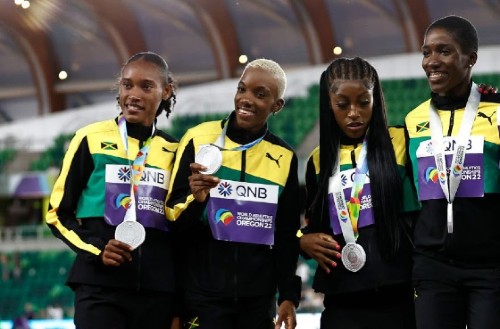 Jamaica’s 4x400m silver medalists Stephenie Ann McPherson, Candice McLeod, Charokee Young, and Janieve Russell on the podium.The Jamaicans were the only Caribbean competitors to make the podium in the evening session of the 10-day championships which saw the island’s men getting their first medal.

The quartet of Akeem Bloomfield, Nathon Allen, Jevaughn Powell and Christopher Taylor put in a sterling run in the 4x400m relay to record a season’s best finish of 2:58.58, behind the Americans who took gold in a world-leading time of 2:6.17.

“I think it was OK today under the given circumstances,” said third-leg runner Powell who had battled from third to take over second place. “It is always a tough task running with the USA team, but we are trying to challenge them as much as possible. And I think we did that.”

It was Jamaica’s first medal for the men in the championships in Oregon and its eighth piece of silverware in the 4x400m in total, to go with three bronze.

In the women’s event, Candice McLeod, Janieve Russell, Stephenie McPherson, and Charokee Young ran 3:20.74, also a season’s best, to finish behind the United States on another world-leading of 3:17.79. Great Britain finished third in 3:22.64.

“It was all about trust and faith. We all trained hard this season, we’re confident in each other’s ability and we just went out there and did our best,” Russell said, with McPherson adding that they “had no doubt we would come out here with a medal”.

Anderson, Jamaica’s new national 100m hurdles record holder following her semifinal performance that was also a personal best, came second in Sunday’s final in 12.23 seconds, behind Tobi Amusan of Nigeria (12.06 seconds). Her compatriot Danielle Williams finished sixth in 12.44 seconds. The Bahamas’ Devynne Charlton crossed the line behind her in 12.53 seconds.

In other events in which Caribbean competitors participated as the championships wrapped up, Jamaica’s Natoya Goule finished fifth in the women’s 800m with a season’s best 1:57.90.

In the medal standings at the end of the championships, Jamaica led the Caribbean and finished third overall with two gold, seven silver, and one bronze.

In the points table, calculated based on finalists, Jamaica was second with 110 points, behind the USA’s 328. Grenada, tying for 13th on the table with the Dominican Republic and Nigeria, had two medals – one gold and one silver; The Bahamas, which shared 22nd spot on the medal table with seven other countries, had one gold; and Barbados had one bronze, along with five other countries that all tied for 40th spot.