MONTERREY, Mexico – Jamaica punched their ticket to the 2023 FIFA Women’s World Cup in commanding fashion on Monday night, with a 4-0 win over Haiti that featured a Khadija Shaw brace. 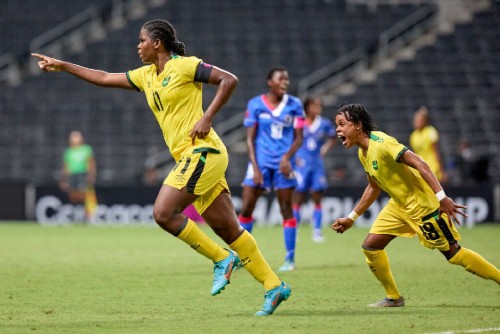 Khadija Shaw (left) was a key player for Jamaica to overcome Haiti and qualify for the second time ever for the FIFA Women´s World Cup. (Photo: CONCACAF)The result in the Reggae Girlz final match of Group A of the 2022 CONCACAF Women’s Championship (CWC) meant they have qualified for a second straight Women’s World Cup, making it the second time in history that a Caribbean team have qualified for a Women’s World Cup.

Haiti have finished in third place and will advance to next February’s 10-team 2023 Women’s World Cup Playoff in New Zealand for another chance to reach Australia/New Zealand.

The blistering pace at the start of Monday’s game at the Estadio BBVA in Monterrey made for a back-and-forth affair. Haiti’s Melchie Dumornay almost scored the opener with a dazzling solo run from her own half that ended with her shot ringing off the post.

Jamaica were the ones to break the deadlock as some nice work from Shaw set up Trudi Carter, whose right-footed shot beat Haiti goalkeeper Nahomie Ambroise to make it 1-0 to the Reggae Girlz in the 26th minute.

Haiti went right to work to try to find an equalizer and Roselord Borgella had it all there to get it in the 52nd minute off a Jamaica turnover, but instead swung her shot wide of the post.

Haiti continued to push forward in search of a goal, but it left space behind for the Jamaican attack and Shaw was happy to take advantage of it by firing in a right-footed shot to double Jamaica’s lead to 2-0 in the 58th minute.

Nevertheless, Haiti kept pushing and almost pulled a goal back in the 63rd minute through a blazing effort from Dumornay, only to see Jamaica goalkeeper Rebecca Spencer parry the ball onto the post and eventually out of play.

However, the night belonged to Shaw and Jamaica and after a Haiti handball in the area, the Manchester City striker stepped up and fired in her third goal of the CWC from the penalty spot for a 3-0 lead in the 70th minute.

They then capped off their magical night nine minutes later with a well-placed header from Drew Spence off a free kick to complete the winning 4-0 score line, earning their first-ever CWC win against Haiti in three attempts.