DELHI, India – Speculation over the immediate future of the lucrative Indian Premier League intensified Monday, as COVID-19 cases in the country continued to surge with another 352 000 infections reported within the last 24 hours. 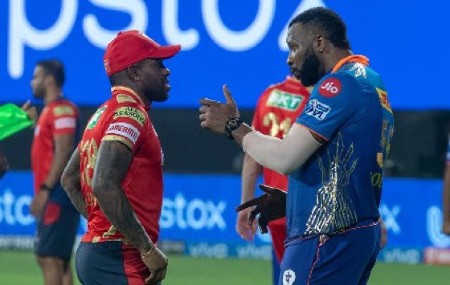 Mumbai Indians’ Kieron Pollard (right) chats with West Indies teammate Fabian Allen of Punjab Kings, following a game in the IPL recently.India, which boasts a population of 1.3 billion, set a global record for infections for a fifth straight day, taking active cases to 2.8 million and the death tally to nearly 198 000.

Tournament organizers, the Indian Cricket Board (BCCI), appeared willing to press ahead with the Twenty20 franchise tournament despite the raging pandemic, with one senior board official who requested anonymity, telling the Hindu publication “the tournament will continue as planned, at least for now.”

However, several players have already withdrawn from the IPL with the likes of England’s Liam Livingstone, Australians Andrew Tye, Adam Zampa and Kane Richardson, and India’s Ravichandran Ashwin, all leaving citing concerns.

There was no indication Monday, however, that any departures were imminent among the Caribbean group.

Morgan, who is the KKR captain, said Monday discussions were ongoing among players about the dire situation across the country, even though players remained safe in their bio-secure bubbles.

“We’re constantly talking about the situation that’s unfolding outside of our bubble. It’s not nice watching from afar, certainly considering how lucky we are to be in a bubble and not be affected by it very much,” he said after leading KKR to victory in Ahmedabad, one of two cities – along with Delhi – which will now host IPL matches after the tournament started in Mumbai and Chennai earlier this month.

“We obviously lend our support and heart-felt attitude to everyone who is ill or going through tough times.

“Certainly, in the UK last year we went through severe lockdowns for a prolonged period of time and it looked for a long time where cricket wasn’t going to be played for our summer.

“But coming together and working together certainly under the guidance of the government, the England cricket board and everybody at home helped change that.”

Health and safety in the IPL have been a high priority since the start of the tournament with players and personnel tested every two days and isolated from contact outside their bubble.

The pandemic forced a global cessation of the sport last year March before a historic bio-secure three-Test series between West Indies and England last July signaled a resumption.

Since then, international cricket has been played in bio-secure bubbles, with the IPL staged last September to November in the United Arab Emirates.

This year’s tournament is set to wind up May 30.