History is Made in the Men's 400m by Gardiner and James; Parchment Takes Gold in Men's 110m Hurdle

TOKYO, Japan – Steven Gardiner became the first Bahamian to capture gold in an Olympic men’s 400 meters while Grenadian Kirani James claimed bronze to snatch his piece of history, as Jamaican Hansle Parchment also won the men’s sprint hurdles on a dominant day of competition for the Caribbean here Thursday. 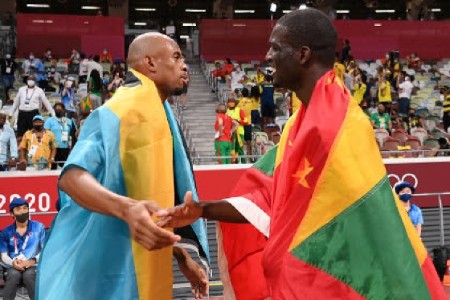 With the finish, James now holds an unparalleled record in the Olympic 400m. With gold in 2012 and silver in Rio 2016, he is the first 400 meters runner to step on to the Games podium three times.

Gardiner, the reigning World champion, produced a solid first 200 meters with James, running out of lane four, in contention down the backstretch and American Michael Norman also threatening from lane eight.

However, Gardiner quickened coming off the final turn to be level with Norman and James at the top of the stretch, before accelerating away from the field to win comfortably.

“At my first Olympics [in Rio 2016], I didn’t make the final but I think here in Tokyo I did what needed to be done,” Gardiner said afterwards. “It is unreal. I don’t think I will sleep tonight.”

Parchment, meanwhile, zoomed through the latter stages of the 110 meter hurdles final to upset favored American Grant Holloway in 13.04 seconds, his fastest time since 2015.

Behind Parchment, the 2012 bronze medalist, and Holloway, the reigning World champion, was Jamaica’s Ronald Levy at 13.10 seconds. 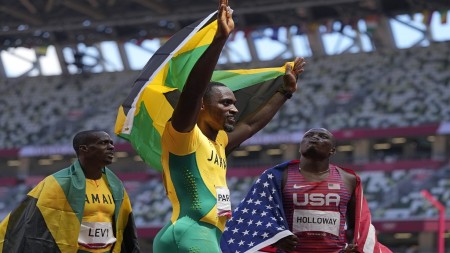 Holloway darted from the blocks in lane four to establish a clear lead but the 31-year-old Parchment caught the American on the last hurdle and out-sprinted him to the finish.

[This victory] wasn’t a surprise for me. I had it in my mind, I knew what I wanted and I maintained my composure and I kept working,” Parchment said.

“I think I had a decent start and I just ran straight through to the line.”

He added: “I don’t think I have all the words to explain [how I feel] right now. I am very happy, elated. It’s been a long season [and] a tough season.”

Holloway’s loss came as a shock especially since he had clocked 12.81 seconds, just 0.01 off the world record, at the US Trials.

The first round of the relays gave hope of more medals to come for the Caribbean as Jamaica led all qualifiers in the men’s 4x100m with a time of 37.82 seconds.

China narrowly won the second qualifying race over Canada with both teams clocked at 37.92 seconds.

Shockingly, the USA will miss the final after placing sixth in the semi-final won by the Chinese.

A third place finish was enough to send the 2019 World Champions to the final.

Trinidad and Tobago missed the cut in both races despite times of 38.62 seconds in the men’s relay and 43.62 in the women’s event.

Jamaica also advanced in the women’s 4×400 relay, after a semi-final pursuit of the USA yielded a time of three minutes,  21.95 seconds.

On the field, there was no joy for 37-year-old St Lucian high jumper Levern Spencer, who managed just 1.86 meters in a qualifying competition in which 14 women cleared 1.95 meters.

The Caribbean’s hopes of success on Friday rests on defending 400 meters champion Shaunae Miller-Uibo of the Bahamas, Jamaicans Stephenie-Ann McPherson and Candice McLeod, Cuban Roxana Gomez and Marileidys Paulino of the Dominican Republic, all of who line up in the final of the event at 9:35 pm (8:35 am Eastern Caribbean time).

The Bahamian edged Allyson Felix to the gold medal in 2016 and the American is also set to line up in Friday’s final.

Track and field history beckons for Miller-Uibo. Were she to win, she would become the first Bahamian to collect two gold medals in the 400 meters, joining France’s Marie Jose Perec, the 1992 and 1996 queen, as a repeat champion.

Tonique Williams of the Bahamas triumphed in 2004.

The women’s sprint relay final is scheduled for 10:30 pm (9.30 am Easter Caribbean time) with the corresponding men’s event carded for 20 minutes later.