EUGENE, Oregon – Olympic champion Elaine Thompson-Herah sped to the second fastest time in history as she continued her imperious form with victory in the 100 meters in the eighth Diamond League meet of the season here Saturday. 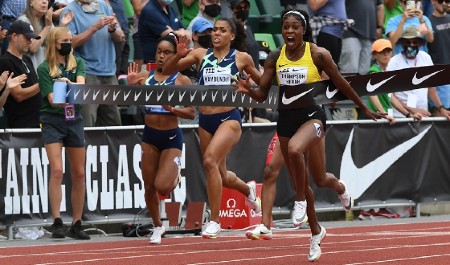 Jamaican Elaine Thompson-Herah hits the wire strongly in the 100 meters in Eugene on Saturday.The 29-year-old clocked 10.54 seconds to be just outside of legendary American Florence Griffith-Joyner’s all-time record of 10.49, as she stamped her authority in inspiring a Jamaican sweep of the top three spots.

Shelly-Ann Fraser-Pryce was timed at 10.73 for second while Shericka Jackson clocked 10.76 to finish third, in a repeat of the podium at the recent Tokyo Olympics.

“I think the records are in reach because I ran 10.5 and I have so much more in me,” Thompson-Herah said afterwards.

“I don’t want to get carried away – the celebrations will start in October and November, but for now I have a mission to complete.”

The highly anticipated showdown with American sprint sensation Sha’Carri Richardson never materialized, the 21-year-old finishing last in 11.14 seconds in what was an underwhelming performance.

Fraser-Pryce was away quickly in lane four with Jackson in lane three in pursuit, and American Teahna Daniels also in contention in lane one.

“To come back with a PB after the championships, that is amazing. I haven’t run that fast in five years,” Thompson-Herah said.

“It means a lot to me … because my job is to inspire a generation. I have more races so I don’t get too excited, too carried away. I have to continue doing the job.”

Thompson-Herah made history at the Tokyo Olympics, becoming the first woman to repeat as double sprint champion. On that occasion, she produced a new Olympic record of 10.61.

There were no headlines for 19-year-old Jamaican star Brianna Williams as she finished only ahead of Richardson in 11.09.