BRIDGETOWN, Barbados – Chief selector the Most Honourable Desmond Haynes believes the opening combination of Kraigg Brathwaite and the uncapped Tagenarine Chanderpaul, can pay dividends for West Indies in Australia despite their almost identical batting styles. 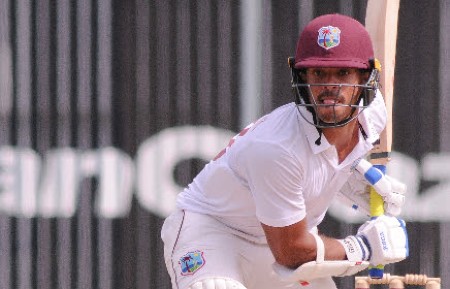 Uncapped opener Tagenarine Chanderpaul.The 26-year-old Chanderpaul has been included in the 16-man squad for the two-Test series starting next month, and in the absence of attacking opener John Campbell, is expected to partner Brathwaite at the top of the order.

Both Chanderpaul and Brathwaite are attritional in their approach, trending more towards being occupiers of the crease rather than fluent run-scorers, but Haynes said this could prove a boon for West Indies.

“I believe [they can work well together]. I think what you have to take into consideration too is with Tage, a young man, he’s got a very good technique to the new ball which is good,” said Haynes, himself one of Test cricket’s legendary openers.

“He leaves alone very well. When you go to places like Australia, you don’t want to see the number three batsman coming in too early or the number four.

“So I think he and Kraigg would definitely complement each other because at least they would be looking at what openers should do for a team as well, which is build a foundation for the side so the guys coming in down the order would not get the new ball.”

Captain Brathwaite is renowned for his slow batting which has nevertheless yielded nearly 5 000 Test runs at an average of 34, including 10 hundreds.

His powers of concentration were never more evident than in the second Test against England at Kensington Oval last March when the 29-year-old hit a marathon 160 in the first innings and an unbeaten 56 in the second.

All told, he spent a combined 15 hours and 45 minutes, along with 673 balls at the crease – a record for a West Indies batsman in a single Test.

Left-hander Chanderpaul, meanwhile, the son of former Test captain Shiv Chanderpaul, has scored five first class hundreds with an average of 34. The last of those hundreds – 109 against Bangladesh A in St Lucia last August – required 337 balls in 6-¾ hours at the crease.

Haynes, who formed Test cricket’s most feared opening partnership with Sir Gordon Greenidge, said the upcoming series would be an excellent starting point for Chanderpaul’s career.

“I think it’s a good choice of picking the young man. [There is] no better place to start your cricket career than Australia where a lot of people believe if you do well against Australia then you’re rated,” Haynes explained.

“It’s always been considered a tough place to play cricket and I think he has the ability to do it and I want to wish him all the best.

West Indies are expected to assemble in Australia on November 10 and will play a three-day game against an ACT/NSW XI at the Philip Oval in Canberra starting seven days later, before facing the Prime Minister’s XI in a four-day match beginning November 23 at Manuka Oval in the same city.

The first Test bowls off in Perth on November 30 with the second in Adelaide – a day/night affair – scheduled to start December 8.