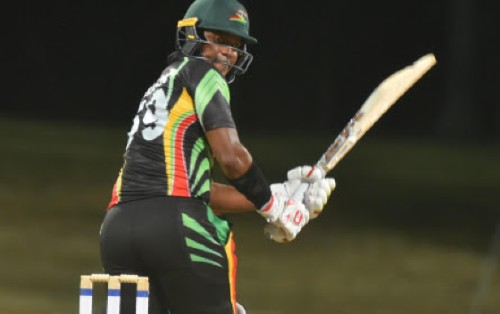 Captain Leon Johnson.Asked to chase only 207 for victory in the Zone A day/night contest here late Saturday, Harpy Eagles recovered from a dodgy start of 33 for two in the sixth over to reach their target in the 43rd.

Imlach, a 25-year-old right-hander in only his 15th List A game, punched 63 not out batting at number four, facing 100 balls and stroking half-dozen fours.

He pulled the innings around first in a 23-run, third wicket stand with Test recruit Tagenarine Chanderpaul (15) before anchoring two successive half-century stands with captain Leon Johnson (51) and Sherfane Rutherford (37).

Sent in at Brian Lara Stadium, CCC got 38 from captain Denesh Ramdin, 36 from Demario Richards and 30 from Navin Bidaisee but Man-of-the-Match Romario Shepherd claimed four for 19 to undermine the innings for 206 in the penultimate over.

CCC had a poor start to be 28 for two in the eighth over before Bidaisee helped stitch up the innings with Richards, who counted half-dozen fours and a six in a breezy 43-ball knock before retiring hurt, and then with Ramdin who hit two fours off 57 balls.

At 163 for four in the 40th over, CCC appeared poised to post a competitive score but Shepherd ruined those plans by picking up three of the last five wickets which went down for 43 runs.

In reply, fast bowler Michail Powell (2-37) made two early strikes and when Chanderpaul drove off-spinner Romario Greaves to mid-off off the first ball following the first drinks break, Harpy Eagles were slipping on 56 for three in the 16th.

But Imlach remained steady, putting on 80 for the fourth wicket with Johnson who lashed half-dozen fours off 68 deliveries and a further 63 for the fifth wicket with Rutherford who blasted one four and four sixes in a 26-ball cameo.