Guyana Harpy Eagles Bounce Back With Win Over CCC 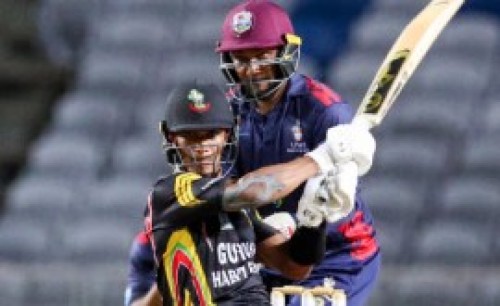 Tevin Imlach … top-scored with 75.In a lopsided Zone A encounter at Queen’s Park Oval, the in-form Tevin Imlach struck 75 from 88 deliveries while Kemol Savory weighed in with 69 from 101 balls, to propel Harpy Eagles to 266 all out in the 48th over.

CCC offered very little in reply, bundled out for a disappointing 137 at the start of the 37th over, captain Denesh Ramdin again top-scoring with an unbeaten 32 and Kirstal Kallicharan also getting 32.

Seamer Nial Smith (3-21) and off-spinner Kevin Sinclair (3-25) both claimed three-wicket hauls as CCC declined from 90 for two in the 21st over, losing their last eight wickets for 47 runs.

Coming off a defeat to reigning champions Trinidad and Tobago Red Force in their last game, Harpy Eagles ensured there were no major gaffes this time, even though their batting once again lacked consistency.

They lost Anthony Bramble (18) cheaply in the seventh over at 26 for one, edging behind a cross-batted heave at seamer Matthew Forde (2-41) but recovered through a 133-run, second wicket stand between Imlach and Savory.

Imlach, a 25-year-old right-hander, struck a four and two sixes to push his tally for the campaign to 248 runs while Savory, a 26-year-old left-hander in only his eighth List A match, punched half-dozen fours.

Their stand was flourishing when off-spinner Romario Greaves (2-64) intervened to remove both, Savory spooning to short extra cover in the 34th and Imlach bowled at the end of the 38th missing an almighty heave, after adding a further 32 for the third wicket with Shimron Hetmyer (21).

His dismissal led to a cluster of wickets for CCC – three falling for four runs in the space of nine balls – as Harpy Eagles slipped to 195 for five in the 40th over.

Sinclair then chipped in with a 19-ball 27 to rally the innings late on.

CCC’s reply started on a high, the 22-year-old Kallicharan lashing five fours and a six in a breezy 25-ball knock, in an opening stand of 52 off 44 deliveries with Kyle Roopchand (21).

Fast bowler Romario Shepherd (2-25) got the breakthrough when he enticed Kallicharan to hole out to deep square on the pull and Jonathan Drakes followed for six with only 10 runs added, taken smartly at slip by captain Leon Johnson edging a drive at left-arm spinner Gudakesh Motie (2-21).