Grenadian James Hailed As ‘Great Champion and Human Being’ 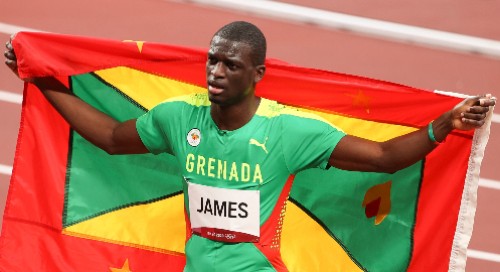 Grenadian Kirani James celebrates his bronze last week at the Tokyo Games.The 28-year-old James made history by becoming the first man to win medals in the 400 meters at three successive Olympics when he finished behind winner Bahamian Steven Gardiner and silver medalist Anthony Zambrano of Colombia.

His success came amid his battle with Graves Disease, an autoimmune condition which results in an overactive thyroid.

“I’m so proud to see he was able to overcome the illness that he had and get back on the track and win a medal for his country again and it just shows you the champion that he is, showing how relentless he is,” the legendary Davis-Thompson told CMC Sports.

“Because to be able to get over something that devastating and to come back at the Olympic level, you don’t get [any] higher than this.”

James won Olympic gold at the London 2012 Olympics before capturing silver in Rio five years ago.

His feat of medals at three successive Olympics elevated him past the likes of Jamaica’s Herb McKenley and Americans Steve Lewis, Michael Johnson and Lashawn Merritt.

Davis-Thompson, who won Olympic gold in the 200 meters and the 4×100 in 2000, also showered praise on James for his assistance to newly minted Olympic 400 meters champion Gardiner after the final last week.

“The man is a great champion but other than that, he’s a great human being.”

Gardiner, 25, and James are the only athletes from the region to have won the 400 meters at both the Olympics and the World Championships.

Gardiner won his World title in Doha two years ago while James captured gold in Daegu at the 2011 showpiece.