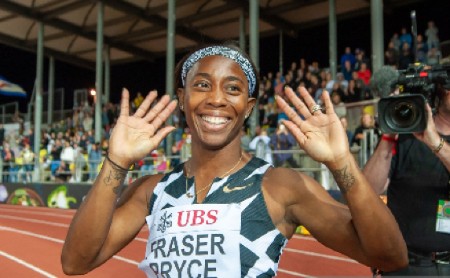 Shelly-Ann Fraser-Pryce celebrates her victory in Lausanne on Thursday.The 34-year-old clocked a personal best 10.60 seconds to finish ahead of Thompson-Herah who was second in 10.64, while fellow Jamaican Shericka Jackson was third in 10.92.

Last weekend in Eugene, Thompson-Herah sped to the second fastest time ever of 10.54, to lead home Fraser-Pryce and Jackson, in a repeat of the podium finish at the Tokyo Olympics last month.

This time, however, Fraser-Pryce burst from the blocks in lane four to lead early, and not even Thompson-Herah’s late acceleration in lane six could change the outcome.

“I’m feeling good. It was cold but I still came out here to do my job,” Fraser-Pryce said afterwards.

“Believe it or not I still have not ran my best race, I know there is more to give because I still need to work further on perfecting my technique.

“There will be more from me this season, and certainly my goal is to break into the 10.5 range. The crowd in Lausanne was amazing as usual.”

Thompson-Herah, who clocked 10.61 in Tokyo to repeat as the 100m champion, said fatigue was finally setting in after her recent outstanding performances.

“My body is feeling tired after a long season and especially after having done personal best four times in a month so that’s amazing for sure,” she said.

“I have no plans to break the world record and I never thought I’d be getting so close. I’m simply going to continue working hard, finish this season strong and come back even stronger next season.”

Olympic champion Hansle Parchment tasted defeat in the men’s sprint hurdles when he finished last, after suffering from poor execution.

Jamaican Ronald Levy, who captured bronze in Tokyo, was fourth in 13.40.

“I hit a hurdle early and then was able to catch up with them, but then in doing that I began to run too fast to the hurdle and clipped another one.

“It’s my first race since the Olympics and it just wasn’t my day. Now I’ll turn my attention to my next race which is in Paris.”

Bahamian Steven Gardiner, who won 400m gold in Tokyo, finished third in the 200 meters in 20.11 while Barbadian Sada Williams was second in the women’s 400 meters in 50.77 as the Dominican Republic Marileidy Paulino won in 50.40.

“It was very cold out there today but I did not feel the wind too much,” Williams noted.

“I am happy with the result and 50.7 was the best I could do in these conditions. I will race next in Paris where my goal is to beat 50.1.”

Javelin World champion Anderson Peters of Grenada, who endured a miserable outing at the recent Olympics, finished third with a throw of 84.32 meters.

And Jamaican Shanieka Ricketts claimed silver in the women’s triple jump with a leap of 15.02, behind Venezuelan Yulimar Rojas who posted a meet record 15.56.

Ricketts’s teammate, Kimberley Williams, was fourth with 14.29 while Dominican Thea Lafond was sixth with a leap of 14.14.

“Today feels like redemption after the Olympics where I was a bit disappointed with my results,” said Ricketts, who was fourth in Tokyo with 14.84.

“I must say I’m grateful because I’ve been having a great season this year with lots of consistently big jumps. Today was not wind legal but it gives me the confidence to know that I’m back in good shape.

“Between myself and Kimberly Williams I hope we are influencing another generation of triple jumpers back home because we have the talent to do well.”