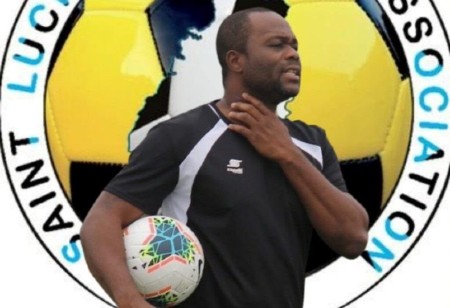 Stern John.John, who has also served as the head coach for the Anguilla men’s senior national team, an assistant coach for his country’s senior men’s team, and head coach of the T&T U-17 men’s team, said his aim would be to improve St Lucia’s performance in the sport.

“A new journey begins this month and I believe that with the right mindset and with a proper, calculated approach with the necessary support, we can put St Lucia back on the football map in our region,” he said.

“History shows that this island has produced some quality players in the past who have played professional football in Europe in countries such as England and Portugal. This is evidence that there are talented and capable players in St Lucia’s football. It’s just to get that belief again among the players and people of St Lucia again.

“The President and the FA have a clear vision of what they want to achieve and the direction they want to take the football. I will give it my all to try and bring some level of respect and stability to the National Team and hopefully some smiles to the people of St Lucia again,” John added.

His first order of business with be preparing the team for its opening CONCACAF Nations League encounter away to Dominica on June 9 and at home to Anguilla on June 12.

John, a former standout player for T&T, appeared at the 2006 FIFA World Cup finals for the Soca Warriors.

At club level, John has won the Trinidad and Tobago Professional League title with Central FC in 2017 and a year later led the club to the winners row in Group B of the CONCACAF Caribbean Club Championship Group stage, helping the team to advance to the finals where they placed fourth.

As a player, he amassed 70 goals in 115 international appearances for his country and is currently 18th on the list of leading goal scorer in international football.

John played in the English Premiership for Birmingham City, winning the club’s leading goal scorer award in 2003, and was also a member of several other clubs, including Nottingham Forest, Sunderland, Crystal Palace, Derby County, Coventry City, Southampton and Bristol Rovers. He won an English Championship Division winners medal with Sunderland in 2007