Forest Green Rovers’ head coach Mark Cooper has hailed striker Jamille Matt’s performances this season as “brilliant” after the Jamaican’s hat-trick powered the West Country outfit to a resounding 4-1 win at Scunthorpe in an English League Two match at the weekend. 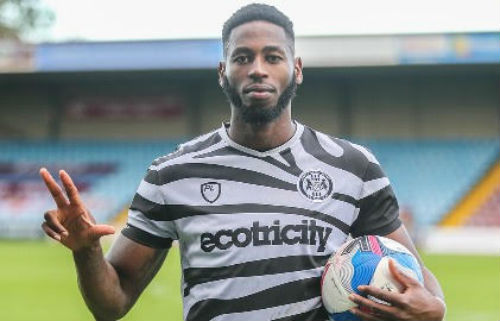 Jamaican Jamille Matt celebrates his hat-trick with the match ball.Matt, who turns 31 on Tuesday week, moved from rivals Newport County for an undisclosed fee in the summer on a one-year deal – but going into Saturday’s game had only one goal from four league outings to show for his efforts.

Having broken his club duck the previous weekend in a 1-1 home draw against Walsall, Matt was on fire on Saturday with goals in the 24th, 32nd and 83rd minutes – and might have scored four but officials waved away claims as his shot appeared to be over the line when Forest Green still trailed.

Cooper said it is not  just goals that Matt has in his locker.

“I don’t really judge Jamille on his goals because he’s a target man first and foremost and the focal point of the attack so he brings so much more than goals,” he said after the game at Sands Venue Stadium.

“He’s been a bit frustrated because he’s not scored what he thinks he should’ve but his performances have been brilliant.

“I hope he enjoys his night; he deserves it.”

But while Cooper, whose unbeaten side have moved up to sixth on nine points from five games and next face Stevenage, was pleased with the three points, he described Saturday’s win as “probably our worst performance”.

Cooper bemoaned the opening exchanges as Rovers went down to an early goal from Aaron Jarvis.

“Probably, our worst performance in a way and you could tell we travelled on the day. The first 15 minutes, it looked like we were still on the motorway, but we dug in and the boys were fantastic again and recovered from the goal,” he said.

“That was a short, sharp shock to the system and from then on we started to play a little bit.

“We’ve got plenty of work to do and keep improving.”