LONDON, Mar  20, CMC – St Kitts and Nevis international Michael Nottingham helped Accrington Stanley get their English League One play-off charge back on track with a come-from-behind 3-1 win over lowly Wigan Athletic on Saturday. 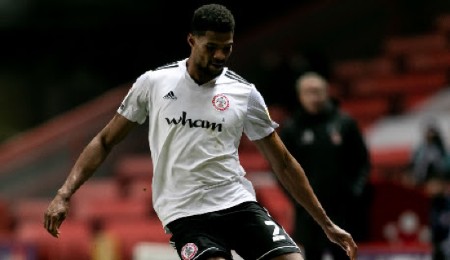 St Kitts and Nevis international Michael Nottingham.Two strikers of Jamaican descent, Ivan Toney and Andre Gray, who are being lined up by officials in the Caribbean island to make their debut for the Reggae Boyz ahead of World Cup qualifiers, were also on target in the second-tier Championship.

Playing at the Wham Stadium in the northwest, Birmingham-born Nottingham, 31, a six-foot, four-inch defender who received his first call-up to the St Kitts and Nevis team in 2017 through his heritage, restored Accrington’s lead in the 15th minute when he forced home a McConville free-kick into the six-yard box despite goalkeeper Jamie Jones trying to scramble the ball off the line.

Accrington had lost their last three games, but victory in the third tier of the English pyramid left them three points outside the top six in a tightly-packed table – after visitors Wigan took the lead inside 40 seconds through Callum Lang, who raced forward to fire home his seventh League One goal since signing in January.

Accrington replied in the third minute when Cameron Burgess leapt highest to connect with a Sean McConville free-kick and his towering header found the back of the net.

Accrington increased their lead in the 61st minute after McConville was fouled in the area by Tendayi Darikwa and Dion Charles rifled home the penalty, his 18th goal of the season in the same week as his call-up to the Northern Ireland squad.

Toney, a 25-year-old Northampton-born striker, scored his 28th goal of the campaign for Brentford, nonchalantly rolling in the 12th-minute opener from the penalty spot after Gaetan Bong had dragged him down in the box.

The draw at the Brentford Community Stadium leaves the Bees seven points behind second-placed Watford, who beat struggling Birmingham 3-0 at Vicarage Road.

Wolverhampton-born Gray, 29, wrapped up Watford’s victory with a third on 80 minutes, just seconds after coming on as a substitute.

Birmingham conceded possession on the halfway line and Gray raced clear before clipping the ball beyond goalkeeper Neil Etheridge for his fourth goal of the season.

Other goals by Ken Sema, who made way for Gray, and Nathaniel Chalobah strengthened Watford’s promotion charge with a fifth straight win and their ninth in 10 games, although they are still eight points behind leaders Norwich City.