Following Their 2nd Straight Loss, the West Indies Look for a Turnaround

DUBAI, United Arab Emirates – Captain Kieron Pollard has bemoaned his side’s lethargic batting following their second straight defeat of the Twenty20 World Cup, and says a rethink of the combination will be necessary if West Indies are to turnaround their losing form. 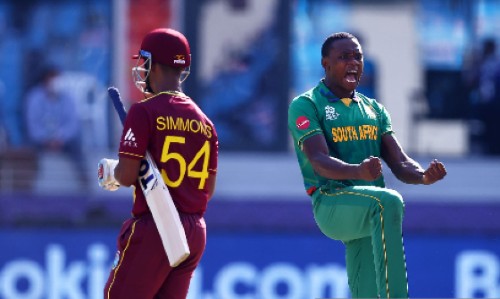 Lendl Simmons trudges off following his pedestrian 16 from 35 deliveries against South Africa on Tuesday, as fast bowler Kagiso Rabada celebrates.The Caribbean side managed only 143 for eight from their 20 overs after being sent in on Tuesday and South Africa hardly broke a sweat as they chased down the target to win by eight wickets with 10 deliveries to spare.

For West Indies, the result followed their six-wicket loss to England in their opening game last Saturday, when they were bundled out for near historic low of 55.

“For me, I think as a team and as a unit we have not batted well. I’m not going to sit here and single out any individuals,” Pollard told a post-match media conference.

“I’m not going to throw any of my teammates under the bus. We came here as a West Indies team to do a job, and when we win, we win together. When we lose, we lose together.

“We will sit down as a team, as a management, as a selection group and decide what we’re going to do going forward, but as it stands right now, I thought that we didn’t bat well collectively as a team.

“Evin Lewis was outstanding – the start that he gave us as an individual – but we kept losing wickets at crucial times.”

He continued: “With that being said, we’ll have some time, we’ll think about it, and hopefully we come back with the right sort of combination or the right mindset in order to put some more runs on the board.

“From where we were to where we are now, sometimes you have to look at it, and it’s a bit of an improvement, but it was not good enough for us to get over the line.”

Lewis looked in good touch for his 56 off 35 balls, powering a 73-run opening stand but his partner Lendl Simmons was pedestrian and his 16 required 35 deliveries.

Once Lewis was dismissed in the 11th over, the innings fell apart quickly as only Pollard, with 26, passed 20 thereafter.

Veteran Chris Gayle, along with fellow left-handers Shimron Hetmyer and Nicholas Pooran, and Simmons, have all been short of runs in recent times and Pollard said it was reflected in the total.

“I’m obviously disappointed. I thought we left about 20, 25 runs out there when we batted, and that could have made a difference in terms of how we finished off,” he pointed out.

“We got off to a pretty decent start in terms of getting that 40-odd in the powerplay without losing a wicket, and that was our opportunity to try to step a foot on the gas a bit and rotate the strike a bit more and try to get to that 160.”

Against England, West Indies lost early wickets, reduced to 31 for four after the first power-play and 44 for six at the half-way stage, leaving them with little chance of recovery.

And while they improved in the power-play against South Africa, chalking up 43 without loss to be 65 without loss after 10 overs, they lost wickets steadily at the back end of the innings.

“Again, sometimes we look at 40 or close to 50 sometimes in the power-play. What has transpired over the last couple of games, sometimes we have lost too many wickets,” Pollard lamented.

“Sometimes you have to give and take. We didn’t lose any wickets in the power-play [today], so I think that was one of the most important things, and it was a matter of us trying to build the momentum, get it into the last phase or the last quarter of the innings.

“I thought we got a bit stuck in the middle overs and after a good sort of decent powerplay, getting 14 runs or 15 runs in four overs, I thought that’s where we got stuck a bit. Then we just tried to up the ante but it’s always going to be difficult with new guys coming in to bat.”