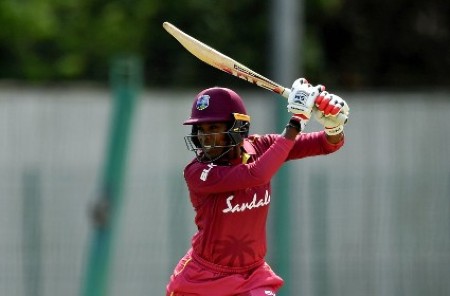 Britney Cooper struck a top score of 40.Chasing a revised target of 194 after Pakistan Women gathered 190 for eight in a contest reduced to 34 overs per side, the hosts were dismissed for 171, to end the series on a low note with defeats in their last two matches.

Britney Cooper top-scored with a fluent 40 off 53 balls while all-rounder Deandra Dottin struck a breezy 37 off 47 balls and Kyshona Knight, 28.

However, Fatima removed both to trigger West Indies Women’s decline, as the home side crashed from 120 for three at the half-way stage, losing their last seven wickets for 51 runs.

Sent in earlier following a long delay due to excess moisture on the playing area, Pakistan Women racked up 190 for eight off their allotted overs with opener Muneeba Ali top-scoring with 39.

Muneeba faced 59 balls and struck five fours, putting on a 41-run, opening stand with Sidra Ameen (13) and adding a further 49 for the third wicket with  Omaima Sohail whose busy 34 came from 37 balls and included three fours.

Sohail staged a 34-run fourth wicket partnership with Kainat Imtiaz (21) before Player-of-the-Match Fatima chipped in with the bat, blasting a 19-ball unbeaten 28 with four fours towards the end.

Seamers Shabika Gajnabi (2-26) and Chinelle Henry (2-37), along with off-spinner Anisa Mohammed (2-39) all finished with two wickets each.

In reply, Hayley Matthews fell cheaply for two in the fourth over with 14 runs on the board before Cooper and Dottin came together in a 48-run, second wicket stand to revive the innings.

Captain Stafanie Taylor (21) joined Cooper to post 32 for the third and then added 27 for the fourth with Knight before things fell apart quickly.