MIAMI, Florida, , – Orlando’s Exploria Stadium and Austin’s Q2 Stadium will play host to CONCACAF Gold Cup matches for the first time ever, in this year’s edition of confederation showpiece. 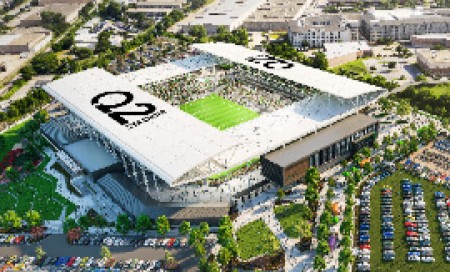 Q2 Stadium in Austin, Texas.The venues were among nine announced Thursday by organizers which will stage group, quarter-final and semi-final matches in the July 10 to August 1 tournament.

Dallas’ Cotton Bowl, which last hosted a Gold Cup fixture 28 years ago, is back on the itinerary and is accompanied by the AT&T Stadium in Arlington; BBVA Stadium and NRG Stadium in Houston, Children’s Mercy Park in Kansas City; State Farm Stadium in Glendale and Frisco’s Toyota Stadium.

“The announcement of these outstanding venues moves us a step closer to what is sure to be a great Gold Cup this summer,” said CONCACAF president Victor Montagliani.

“It is fitting that in our 60th anniversary year we will use a number of stadiums with a rich history of hosting CONCACAF football, while also making history with new venues that will host Gold Cup matches for the very first time.”

“I am also extremely pleased that we have enhanced the Gold Cup format so that all the final group stage games will be played simultaneously.

“This will add to the competitive intensity of the tournament and provide an even more compelling spectacle for fans.

Alongside the introduction of a first ever Gold Cup Prelims and a new format in the knockout stage this is another example of our football first approach at CONCACAF.”

The Gold Cup Prelims is a 12-team tournament which will be played from July 2-6 at Inter Miami’s CF Stadium in Fort Lauderdale, to determine the last three spots in the Gold Cup finals.

It comprises the likes of Trinidad and Tobago, Barbados and Guyana among 11 Caribbean Football Union nations, with Guatemala as the only Central American side.

Thursday’s announcements completed the slate of venues for the tournament with Las Vegas’ Allegiant Stadium named last week as hosts for the final.