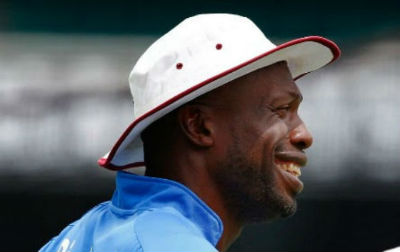 Sir Curtly Ambrose.The 57-year-old, a former assistant coach with the Caribbean side, said urgency among the players had been lacking and was seen in the way the team fielded and batted in both Tests.

West Indies lost each Test by an innings inside four days to extend their dire record of not having won a Test series on New Zealand soil in a quarter-of-a-century.

“The guys are not looking hungry enough. I could be totally wrong – I’m just talking from what I have seen – but they don’t look hungry,” said Sir Curtly, who dominated his era with 405 wickets from 98 Tests.

“They don’t seem to have that type of passion and the pride and the will to win. It seems as if they just go out there, hoping that New Zealand will just fall apart and we can win the game. It doesn’t work like that.

“You have to go out there and command respect, you have to show New Zealand we’re in for business and I don’t really see that.

“We sit back and just wait for something to happen and that’s not the way we West Indians play cricket. We like to be in control.”

“I don’t know what the coaching staff is telling the players but I don’t see that hunger and that pride and passion, and the will to win. It’s just lacking,” he told i95 FM Sports here.

Despite bowling first on well-grassed pitches in both Tests, West Indies bowlers were powerless to prevent the hosts from piling up 519 for seven in Hamilton and 460 in Wellington.

Sir Curtly said while the bowlers had played their part, the fielding left a lot to be desired, especially in the second Test when Henry Nicholls was dropped five times en route to a career-best 174.

“Our whole out cricket was very very disappointing. We are much better than what we are showing,” he contended.

“New Zealand are one of the top-ranked teams in the world, they’re playing at home … but you can’t fault the bowlers too much because the catching and the out-fielding was very poor.

“And you can’t afford to be dropping players two, three, four, five times and expect to do well, so in this case I’m not going to blame the bowlers too much even though we were a little bit inconsistent, they weren’t backed up in the field.”

Jermaine Blackwood was the only West Indies player to score a hundred in the Test series, finishing with 216 runs to be the only specialist batsman to pass 150 runs.

Against the backdrop of the tour, Sir Curtly said changes should be expected.

“In all sports and you keep using several players and they keep under-performing or they keep failing then you leave the selectors no choice but to try other players,” he stressed.

“I think we have to look at our whole cricket and decide where we go from there. I think after New Zealand we have to sit down and look to the future. We have to make some changes because we can’t expect to play the same players over and over and get a different result.”

However, Sir Curtly said no one player could bear responsibility for West Indies’ poor performances.

“It doesn’t matter if you make a huge contribution or a small one. Yes, the captain is under a lot of pressure because when a team is not playing well, most times we just look at the captaincy or the coaching staff.

“At the end of the day, we’re all in the same boat and we all will win together or we all will lose together.”