BRIDGETOWN, Barbados – Jermaine Blackwood has topped West Indies batting averages for a second straight tour, the only specialist Caribbean side batsman to emerge unscathed from the dismal two-Test series against the Black Caps. 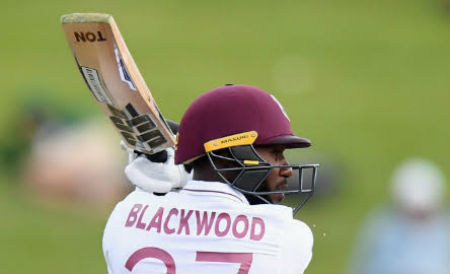 Jermaine Blackwood struck the only century of the tour.The 29-year-old scored 216 runs at an average of 54 and was the only real bright spot as West Indies lost both Tests inside four days by an innings.

Blackwood, an attacking right-hander, was the sole West Indies batsman to pass 200 runs with the next best being opener John Campbell with 110 runs.

The Jamaican Blackwood’s 104 in the second innings of the opening Test in Hamilton was the only time a West Indies batsman saw triple figures in the series.

Despite his knock, West Indies lost by an innings and 134 runs before lunch on the penultimate day.

He followed that up with 69 in the first innings of last weekend’s second Test at the Basin Reserve in Wellington, when the Caribbean side slumped to an inning and 12-run defeat.

Blackwood experienced similar fortunes on last July’s three-Test tour of England when he gathered 211 runs at an average of 35, to be again the only Windies batter to pass 200 runs in the aggregates.

Since his return from a near two-year break after being dropped in 2017, Blackwood has averaged 42 in Tests for West Indies.

Campbell was the only other specialist batsman on the recent tour to pass 100 runs overall, courtesy of his second innings 68 in Wellington. He averaged 27, however, following up his average of 17 against England earlier in the year.

He was part of a West Indies top order which again came under heavy scrutiny. Leading opener Kraigg Brathwaite managed only 55 runs, Shamarh Brooks struggled with 53 while Darren Bravo could only scrape 32 runs – the trio all batting four innings.

Roston Chase, meanwhile, could find his place in the side in jeopardy after scoring 17 runs also from four innings, including a “pair” in the second Test.

Captain Jason Holder (103), who made a half-century in Wellington, and tail-ender Alzarri Joseph, who shone with a fine 86 in Hamilton (110), both passed 100 runs for the series.

Debutant wicketkeeper Joshua Da Silva, who replaced first choice gloveman Shane Dowrich after the first Test, hit 57 in the second innings at the Basin Reserve to be the only other West Indies batsman with a half-century.

In the bowling, speedster Shannon Gabriel picked up six wickets to lead the attack while seamer Joseph finished with four, but Holder went wicket-less in 58 overs in the series.