AHMEDABAD, India – A timid West Indies suffered a six-wicket battering at the hands of India in the opening One-Day International, as their batting woes from the Caribbean followed them onto the subcontinent on Sunday. 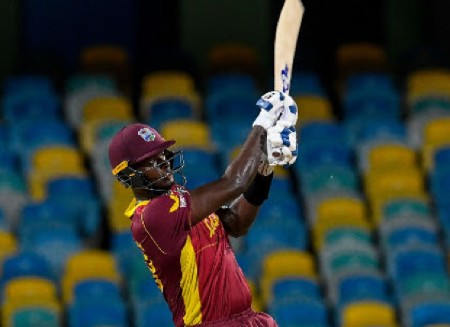 They were crippled by aggressive leg-spinner Yuzvendra Chahal who claimed four for 49 and 22-year-old off-spinner Washington Sundar who picked up three for 30.

Captain Rohit Sharma then belted 60 off 51 deliveries to propel his side past their target with a whopping 22 overs remaining, as the hosts took a 1-0 lead in the three-match series.

A middle order slump that saw four wickets tumble for 22 runs in the space of 27 deliveries handed West Indies a sliver of hope but Suryakumar Yadav (34 not out) and Deepak Hooda (26 not out) combined in a breezy half-century stand to put India comfortably over the line.

“And again it’s the same old for us, not being able to bat 50 overs. [We’re] getting trouble between that ten to 30-over mark, losing five wickets [and] being [79 for seven].”

He added: “Obviously we’ve got to dig deeper, we’ve got to get better with our techniques – myself included in terms of that because we’ve all been guilty sometimes of making mistakes.”

The defeat was the Caribbean side’s 12th in their last 18 ODIs against India, and comes on the heels of their shock 2-1 series defeat to Ireland in Jamaica last month when they were also plagued by inept batting.

Shai Hope (8) was an early casualty, inside-edging a drive at seamer Mohammed Siraj onto his stumps in the third over with 13 on the board but the innings recovered through a 31-run second wicket stand between Darren Bravo (18) and opener Brandon King (13).

However, Sundar’s introduction in the eighth over changed the tone of the innings. He struck in the 12th over, having King caught at mid-wicket and four balls later in the same over, gained an lbw verdict against Bravo courtesy of DRS.

Nicholas Pooran (18) and Shamarh Brooks (12) attempted another rescue mission but had added only 26 for the fourth wicket when Chahal struck twice in his first over – the 20th of the innings – to set West Indies back again.

First, Pooran missed a sweep and was hit in front but was only sent on his way after India resorted to DRS. And off the very next delivery, Pollard missed a drive at a googly and lost his off-stump first ball.

When Shamarh Brooks edged a Chahal leg-break behind in the 22nd over and Akeal Hosein (0) perished to a catch at the wicket off new-ball seamer Prasidh Krishna (2-29) in the next over, West Indies appeared headed for their lowest-ever ODI total against India at 79 for seven.

However, Holder rallied the innings with lower order resistance, thumping four sixes to inspire a precious 78-run partnership for the eighth wicket with Fabian Allen whose 29 came from 43 balls and included two fours.

Not surprisingly, Sundar broke the stand, snaring a low return catch to send back Allen in the 38th and Holder followed in the 41st, nicking behind off one from Krishna which bounced awkwardly.

Rohit then quickly erased any lingering doubt over the result, lashing 10 fours and a six in an 84-run, opening stand with Ishan Kishan who made 28 from 36 deliveries.

By the time seamer Alzarri Joseph (2-45) brought one back to hit Rohit in front in the 14th over and spark a mini slide, India were already on course for victory, and the 62-run, unbroken fifth wicket stand between Suryakumar and Hooda sealed the deal.