BRIDGETOWN, Barbados  – Cricket West Indies president, Ricky Skerritt, has defended the decision to allow the Caribbean side to tour the United Kingdom last year at the height of the global COVID-19 pandemic, contending major benefits had been derived from the move, including the cementing of England’s series in the region next January. 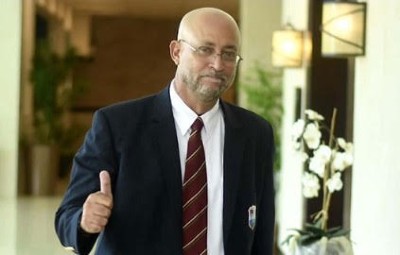 CWI president Ricky Skerritt …has pointed to benefits of the 2020 tour of England.Skerritt, who is seeking re-election at month end along with vice-president Dr Kishore Shallow, said negotiations about the traditionally lucrative series began during discussions over the historic bio-secure three-Test tour.

And the former St Kitts and Nevis cabinet minister said that due to CWI’s commitment to fulfilling the tour amidst the challenging circumstances posed by the coronavirus, the governing body had been able to also advance a proposal to the England and Wales Cricket Board for an even bigger tour.

“The other benefit is that we started negotiating since back then for their (England) next tour to the West Indies which is scheduled for January 2022 which is less than a year from now,” Skerritt told Grenada Sports’ TalkSports YouTube channel.

“And the goodwill generated between us has now allowed us to put on the table and get good traction on expanding that tour.

“Now an England tour for the West Indies is always a very good thing for the West Indies financially and economically because we get more money for the broadcast which we own, because England has a much bigger and more lucrative cricket market, and [Caribbean] countries who host the England team get economic benefits from the tourism impact.”

Tours of the region by the England side have been estimated to generate economic activity of around US$60 million, in what is viewed as a major boost for tourism dependent economies.

The last tour in 2019 comprising three Tests, five One-Day Internationals and three Twenty20s, was projected to earn CWI alone close to US$20 million.

CWI had faced criticism from some quarters for proceeding with the tour last year even as the UK remained in a lockdown due to the onset of the pandemic, and was also chastised for not securing a financial windfall from the ECB in exchange for playing the series.

However, Skerritt said trying to squeeze money out of the ECB in exchange for the tour amounted to “extortion”, and argued there were other more far-reaching benefits which had been realised.

“Extortion is illegal, extortion is corruption. We don’t get into extortion,” Skerritt stressed.

“It is not allowed. It is against the spirit and the rules of the Future Tours Programme. The only people who make money out of a tour is the hosts, other than with your own sponsorship, so us going to England benefited our major sponsor Sandals. You don’t have to be a rocket scientist to understand that.

“So first and foremost, going to England benefited us financially from our arrangement with our major sponsor.”

He continued: “Secondly we got the ECB to allow us to bring a significant number of A-team players. I know we had over [25] players in England at one time. This was good exposure for a lot of our young cricketers that augured well for their preparation and growth.

“So even if they didn’t play in the official Test series, they were practicing, they were net bowlers, they were standby players etcetera.”

With the series, West Indies became the first international team to undertake a tour during the pandemic, playing in what has come to be known as the “bio-secure” bubble.

And Skerritt said the decision was one the regional governing body was proud of.

“So we have no regrets at all about how we handled the England situation. If we didn’t go to England, they were other teams that were ready to go,” he noted.

He added: “I’m happy to say we’ve been able to create this bio-secure bubble in collaboration with the ECB. We’re the pioneers in that. You hear it happening all over the world now but we’re the pioneers.

“We were the first ones to partner with the ECB and prepare what we call a bio-secure bubble, and which is now the model used all over the world.”

Skerritt is being challenged for the CWI presidency by Guyana Cricket Board secretary, Anand Sanasie, who has as his running mate Barbados Cricket Association vice-president, Calvin Hope.