NAIROBI, Kenya – Twins Tia and Tina Clayton sparkled as Jamaica brought the curtain down on the Under-20 World Championship by winning the women’s sprint relay in a world record time here Sunday. 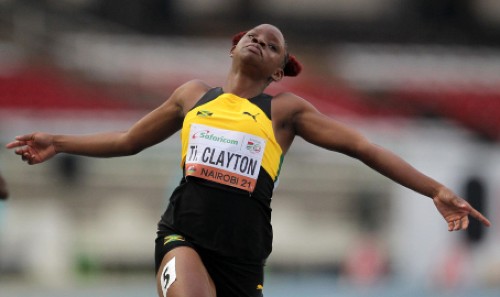 Jamaican sprinter Tina Clayton.Jamaican got the stick around in 42.94 seconds to finish ahead of Namibia (43.76), anchored by Olympic medalist Christine Mboma, with Nigeria taking bronze in 43.90.

The success was one of several for Jamaica on the final day of the showpiece as the country copped silver in the men’s sprint relay, and silver in both the men’s and women’s distance relays.

Devontie Archer fortuitously snatched bronze in the men’s 400 meters and Ralford Mullings provided yet another medal for the Jamaicans with silver in the men’s discus.

However, the day’s headlines were written by the impressive quartet of Clayton sisters, Serena Cole and Kerrica Hill.

Cole produced a swift first leg before Tina unleashed an equally impressive second leg, laying the foundation for Hill to excel on the curve.

Tia got the baton first and sped away to open up a huge lead, with Mboma unable to challenge for the Namibians.

“And I am very happy we finished the race injury free, the baton was around safely. I am glad.”

Tina added: “We put in a lot of work. You know they say ‘train hard, win easy’ so we always train hard so we came out here and did our best and only your best is good enough.”

Archer suffered a stroke of fortune after finishing fourth but being bumped up to third after winner, Sweden’s Oskar Edlund, was later disqualified for a “trail leg infringement”.

It meant that Turkish runner Berke Akcam, who finished second, was awarded gold in a time of 49.38 while Denis Novoseltsev collected silver in 49.62.

Archer, who endured a bumpy last 200 meters and was overtaken by Novoseltsev in the stretch, clocked 49.78.