Claressa Shields made boxing history in Atlantic City on January 10th when she earned a third world title becoming the quickest fighter ever in the sport to win world titles in three different weight classes in just 10 fights. The Michigan pugilist is set to have a breakout year with a Hollywood biopic and cross-over fights in the UFC set to take place. 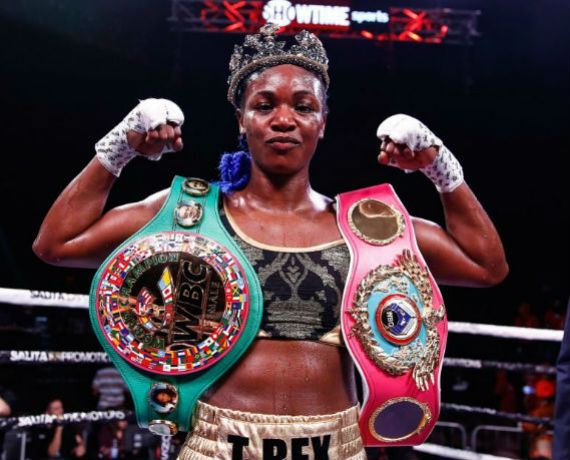 This past weekend, Shields earned a dominate win over Croatia’s Ivana Habazin to earn the WBC and WBO junior middleweight  titles. Shields had promised to knockout Habazin but, had to settle for a unanimous decision victory. Earlier she won the middleweight and supermiddleweight titles.

The Urban News Service caught up with Shields in London earlier this month, where she was doing her final training for the the Habazin fight.

London has been good to Shields where she became the youngest Olympic boxing champion since 1924 when she won a gold-medal there in 2012 at the age of 17. In 2016, she won a second Olympic gold medal at the Rio Olympics becoming the only American boxer to win multiple gold medals in the sport.

During an interview at a fight card held at York Hall, a historic venue dating to the 1929, which is the heart of the London boxing scene, Shields acknowledged her close ties to the United Kingdom.

“I love the fans – the York Hall fans, the British fans, I would love to fight here in the United Kingdom,” said Shields “ I love the atmosphere here. Maybe in 2020 or the year after she said.”

Many female boxers come to the sport from comfortable middle-class backgrounds. Shields’s life hasn’t been easy. Her life story is one of turning to tragedy to triumph. Born in Flint, Michigan, a town full of poverty, despair and though it was not known at the time, poisoned water. Her father spent time in prison for dealing drugs and she didn’t start speaking until the age of five. That same year she was molested by one of her alcoholic mother’s boyfriends.

She was picked-on at school and started boxing at age 11. She chooses the sport after overhearing her father lament he had never pursued his passion for the sport – though he initially objected to her boxing dreams. Despite that she soon joined a gym where she was the only female fighter. In boxing she found personal resilience and found further strength when at 13 she was baptized into a local church.

Not surprisingly her rise through adversity to world champion has attracted the interest of Hollywood filmmakers who are looking to turn the life of the 24-year-old into a major feature film. It was announced last year that Ryan Destiny, perhaps best known for her role in Fox's television show “Star,” will play Claressa Shields in Universal's biopic “Flint Strong” which is currently in production.

The fight most British fans would like to see is a rematch between Shields and the United Kingdom’s Savannah Marshal. Marshal defeated Shields in the amateurs. By chance the two crossed paths at the York Hall event and posed for a promotional stare down.

The leading boxing promotional agency MTK Global released a press-release after the encounter in which Marshal described being “amused” by the face-off with Shields, “our rematch could 100% be the biggest fight in women’s boxing,” she said.

As a professional, Marshal, like Shields, is undefeated. While Shields has accomplished more in her brief boxing career, Marshall at least according to their professional records, could be the harder puncher. Shields has 10 wins with two coming via knockout.  Six of Marshall’s eight wins have come by  knockout.

Another potential blockbuster fight in her future could be with UFC star Amanda Nunes. Shields is training for a mixed-martial arts debut later this year. If all goes well, she would like to fight a series of fights – one in the boxing ring and one in the UFC octagon against the Nunes. Shields believes such fights could have a cross-over appeal similar to the Floyd Mayweather Jr. vs. Connor MacGregor fight in 2017.

“My [MMA] debut is going to happen, and that fight is most likely going to be in September and October,” she told Urban News Service. Shields will most likely take a tune-up fight in the octagon before challenging Nunes.

As a child, Shields was teased over her skinny arms and called “T-Rex” after the proportions of that extinct dinosaur. Shields has embraced the name as ring moniker, but her recent ring victories have led her to start using a new nickname “GWOAT” the acronym for “Greatest Woman of All Time.”