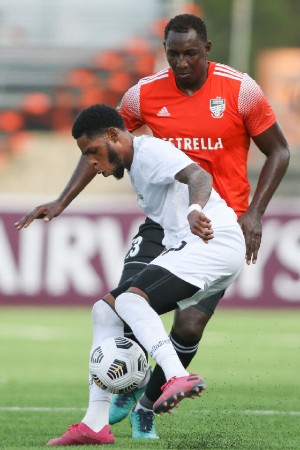 Ronaldo Webster (in white) of Cavalier SC in action in the Jamaican side’s match against Cibao FC during the Flow Concacaf Caribbean Club Championship. (Photo: CONCACAF)Although Cavalier’s campaign ended in the group stage, CONCACAF said the Jamaican club benefitted from one of the top individual performances in the tournament.

It said Webster “showed his great potential” by scoring a brace in Cavalier’s narrow 3-2 defeat to Violette. His first came on a composed left-footed finish with Violette goalkeeper Steve Sanon racing out to stop him, while his second score was a darting header in between a pair of defenders.

“Webster will be one to watch both at club and international level as time goes on,” CONCACAF said as it recapped the top performances of the tournament.

Cavalier as well as another Jamaican club, Waterhouse FC – which finished fourth in the championship and was previously named winner of the tournament’s Fair Play Award – boasted players among the 11 who CONCACAF said stood out the most at their respective positions.

Cavalier midfielder Dwayne Atkinson, the top goal scorer of the tournament, was among them.

“Atkinson may have only seen 154 minutes of action, but he certainly made the most of his time on the field, scoring two goals in the 3-3 draw with Cibao,” it said.

Campbell was described as “a workhorse” for the Jamaican side, logging 475 minutes in Waterhouse’s five games, which ended with a Scotiabank CONCACAF League-clinching victory in the playoff versus Bayamon FC.

Benbow, meantime, was identified as a strong presence going forward for Waterhouse. He capped his tournament with the 1-1 equalizing goal in the third-place match against Atletico Vega Real.