BARCELONA, Spain – Reigning champion Lewis Hamilton believes Sunday’s win in the Spanish Grand Prix has allowed him to gather crucial information on main rival Max Verstappen, as he bids for his fifth straight world title and eighth of a stellar career. 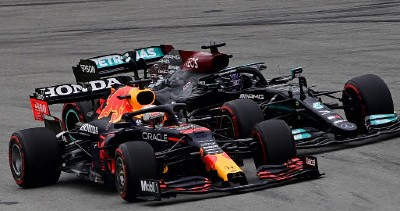 Lewis Hamilton (right) is overtaken by Vax Verstappen at the start of last weekend’s Spanish Grand Prix.The Brit stormed to victory at Circuit de Catalunya, finishing 15 seconds clear of the Dutchman to post his third win in four races and get the upper hand in the early season rivalry.

Despite starting on pole – the 100th of his career – Hamilton was passed by Verstappen on the first corner before battling back to overtake the Red Bull with six laps left.

“I’m continuing to love this battle we are having. I didn’t know whether we would be able to follow them as closely as we did in the end,” said Hamilton, whose paternal grandparents are Grenadian and who has already been honored by the Caribbean country for his achievements.

“Obviously, Turn 1, the start was not ideal and we are going to have to review it and see how we can do better in the future. But as soon as we got passed in Turn 1, I was like, ‘OK, switch into a different mode’.

“It was actually a really good day. I learned a lot about Max today, perhaps more than all the other races put together. This has been a good one in that sense and great, great teamwork from all of us.

“We were here until late most evenings discussing strategy, [Saturday night] and [Sunday] morning and we had all the bases covered in that respect.

“Of course it just meant that I had to do the job on track. Coming back from 20 odd seconds wasn’t easy but I think it was the right one in the end.”

Hamilton edged Verstappen in the season-opener in Bahrain before positions were reversed at Imola, with the 23-year-old taking the chequered flag by 22 seconds after starting from second on the grid.

The pendulum swung in Hamilton’s direction in Portugal and again on Sunday, leaving the 36-year-old Mercedes driver on 94 points, 14 points clear of Verstappen.

For Hamilton, the points tally represents his best ever start to a Formula One season but he cautioned he was under no illusions about the size of the challenge presented by the Red Bulls.

“Every year I come back and I’m always trying to improve. Most often it tends to be, or it seems impossible, but it’s a necessity,” he explained.

“The Red Bulls have started off incredibly strong. They do both have a championship-winning car and opportunity. As do we.

“It’s going to take everything from us, not only me bringing my A-game but the team bringing their A-game, weekend-in, weekend-out. Otherwise, these guys will be winning.”