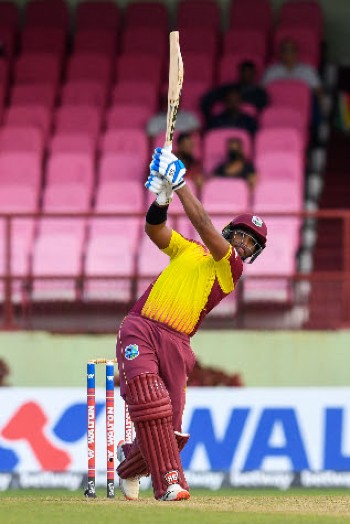 Nicholas Pooran hits out during his unbeaten half-century on Thursday. (Photo courtesy CWI Media)Asked to chase 164 in the final contest at the Guyana National Stadium, West Indies overhauled their target in the penultimate over with the left-handed Pooran finishing on 74 not out off just 30 balls in a dominant knock.

Left-handed Kyle Mayers added 55 off 38 balls at the top of the order, combining with Pooran in a significant 85-run fourth wicket stand to pull the run chase around from a dodgy position of 43 for three in the seventh over.

Earlier, Afif Hossain struck exactly 50 – his second T20I half-century – as Bangladesh gathered 163 for five from their 20 overs after choosing to bat.

Litton Das added 49 while captain Mahmudullah chipped in with 22 but the Tigers failed to find the momentum required to post a challenging target.

Leg-spinner Hayden Walsh Jr was the hosts’ best bowler with two for 25, claiming the key wickets of Das and Mahmudullah.

Thursday’s win came on the heels of a 35-run victory for West Indies on Sunday at Windsor Park in Dominica, after the opener at the same venue was rained off as a no-result on Saturday.

Afif and Mahmudullah, who counted two fours and a six in his 20-ball effort, then controlled the back end for the visitors in a pivotal 49-run fourth wicket partnership before both perished in the penultimate over from Walsh.

In reply, West Indies stumbled early, Brandon King holing out on the edge of the circle off left-arm spinner Nasum Ahmed (2-44) to the sixth ball of the innings, and Shamarh Brooks (12) picking out square leg with a slog sweep in the fourth over from off-spinner Mahedi Hasan.

When all-rounder Odean Smith, elevated to number four, missed a sweep at left-arm spinner Shakib Al Hasan and was lbw for two in the fourth over, the hosts were tottering slightly.

However, Pooran and Mayers took the Bangladesh bowlers apart in a stunning display of hitting which erased any doubt over the result.

Pooran smashed five fours and five sixes, racing to his ninth T20I fifty off 30 balls in the 15th over with a six over long on off Nasum.

Mayers, who counted two fours and five sixes, had earlier reached his maiden T20I fifty off 33 deliveries at the start of the 14th over with a straight six off off-spinner Mosadek Hossain.

By the time Mayers provided Nasum with his second wicket in the 15th over, victory was in sight and Pooran and vice-captain Rovman Powell (9) added a further 25 to all but put West Indies over the line.