GEORGETOWN, Guyana – Captain Hayley Matthews produced another telling all-round performance as she fired Barbados into Saturday’s final of the Women’s Super50 Cup with an emphatic nine-wicket victory over Trinidad and Tobago. 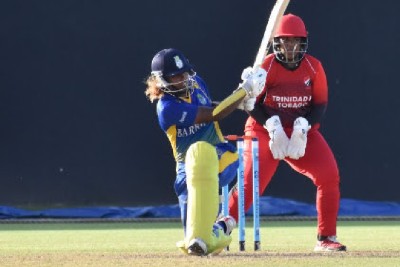 Captain Hayley Matthews hit through the on-side during her half-century on Wednesday. (Photo courtesy CWI Media)Chasing a modest 134 in a game reduced to 33 overs per side because of a rain-delayed start at the Guyana National Stadium on Wednesday, Barbados reached their target with 16 balls to spare.

Matthews extended her excellent form with an unbeaten 50 while Kyshona Knight struck 49 not out, the pair putting Barbados over the line in a 76-run, unbroken second wicket stand.

Matthews had earlier taken three for 20 with her off-spin as Trinidad and Tobago were dismissed for 133 in the penultimate over.

However, it was Aaliyah Alleyne who really rattled T&T with her pace, the new ball bowler snatching four for 31 – including the first four wickets to fall – to reduce the innings to 42 for four in the eighth over.

Lee-Ann Kirby, who top-scored with 41 from 74 balls with a four and a six, put on 21 for the fifth wicket with captain Anisa Mohammed (9) to stem the tide but Matthews triggered another collapse by taking the next three wickets to fall.

Matthews then quickly put to rest any doubt over the result, striking two fours in an 84-ball knock as she posted 61 for the first wicket with Kycia Knight, whose 32 came from 50 deliveries and included three fours.

When Kycia departed in the 17th over, her twin Kyshona arrived to stroke seven fours and a six in a 45-ball cameo as Barbados dominated the back end of the run chase.