NORTH SOUND, Antigua – Captain Kraigg Brathwaite has called for improvements ahead of the second Test against England in Barbados next week, stressing the need for West Indies to create more pressure in the field. 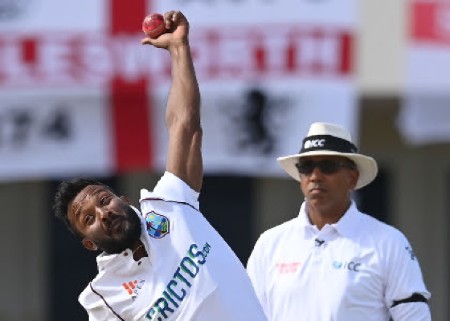 Left-arm spinner Veerasammy Permaul went wicket-less in the opening Test.West Indies held on doggedly to earn a draw on Saturday’s final day of the opening Test at the Vivian Richards Cricket Stadium, ending on 147 for four after being set an improbable 286 for victory in just over two sessions.

After watching his side compete admirably, Brathwaite said there was room for better execution, as his side headed to Bridgetown.

“There are some areas in terms of run rate we can improve and it’s simply just setting the field and bowling to it and being disciplined enough to bowl to that field,” Brathwaite said.

“I think we can do that better especially in the middle overs when a partnership may build. I think once we’re tighter, then we can build a little more pressure for us to get the wickets later in the innings.”

The placid surface during the just concluded help offered little help to seamers and the frontline spinner on either side – left-armers Veerasammy Permaul and Jack Leach – both also struggled to make an impression.

Permaul perhaps fared worse, going wicketless from 25 overs in the game and leaking five runs per over in the second innings when England piled up 349 for six.

Brathwaite said this was an area which also needed to be addressed.

“It’s finding ways to build pressure and as a spinner, under three runs an over is crucial, because obviously the ball didn’t spin much so I think the spinner really has to be tight,” he pointed out.

West Indies found themselves in control at the half-way stage of the game after replying to England’s 311 with 375 to carve out an important 64-run lead.

But Zak Crawley (121) and captain Joe Root (109) then struck centuries to fire England to 349 for six declared in their second innings, leaving West Indies with an improbable 286 to win in just over two sessions.

The hosts were tottering on 67 for four in the second over after tea before Nkrumah Bonner (38 not out) and Jason Holder (37 not out) put on 80 for the fifth wicket to see out the game.

“It was hard fought [over] five days. It is hard work and we showed we had the fight this game,” Brathwaite said.

“I thought it was a very good effort from the bowling group and the batters to come and bat the last day as well.”

He continued: “I think in the first innings we were good with the new ball. I think in the middle when the ball wasn’t doing much [we have] to find ways to be a little tighter.

“I think at periods we were a little too high [with our run rate at] 3.5 runs per over so I think once we can bring that down throughout the innings, that will build a little more pressure and we will be able to get those five, six wickets a little easier in the middle.”

Brathwaite said in contrast to the pitch at the Vivian Richards Cricket Stadium, he expected the Kensington Oval strip to offer a little more to the faster bowlers.

“Obviously this pitch was good for batting. Barbados, we played a first-class game there and the ball was doing a bit so obviously the bowlers may get a little more out of Barbados especially early on,” he said.

“This one is probably a little flatter than how Barbados will be. Pacers will get a little more in Barbados.”