BRIDGETOWN, Barbados – Hopes of a dramatic finish to the second Test faded in the final session as captain Kraigg Brathwaite’s ceaseless fortitude snuffed out England’s desperate attempts at victory, earning West Indies a stalemate on the final day here Sunday. 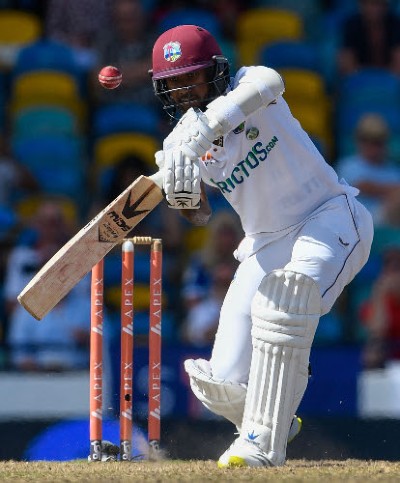 Captain Kraigg Brathwaite bats on Sunday during his game-saving half-century against England. (Photo courtesy CWI Media)Resuming from tea with the game still tentatively poised at 65 for three, West Indies lost two wickets but the blows were not enough to alter the outcome as Brathwaite followed up his first innings 160 with an unbeaten 56 to help steer West Indies safely to 135 for five.

He found great support from vice-captain Jermaine Blackwood (27) with whom he added 50 for the fourth wicket, and from wicketkeeper Joshua Da Silva who was unbeaten on 30 at the end, the pair posting an invaluable 42 for the sixth wicket.

Left-arm spinner Jack Leach knocked over Blackwood and Jason Holder (0) in the session to end with three for 36 while debutant seamer Saqib Mahmood finished with two for 21 following his burst with the new ball.

“I thought it was a tremendous effort. Obviously England bowled extremely well but it was good that a team put up 500 and for us as a team we could fight and put up 400 from 180 overs,” a relaxed Brathwaite said afterwards.

“I thought that was a superb effort. Obviously coming today, Jermaine (Blackwood) again and Joshua Da Silva fighting at the end. That’s the attitude we want.

“That’s what the fans obviously want to see and once we continue fighting like that and have the right attitude, I think this Test team will do well.”

Having produced a first innings marathon that lasted just shy of 12 hours, Brathwaite picked up where he left off, facing 184 deliveries in a shade over four hours and hitting four fours.

In doing so, he entered the record books for the longest time batted in a Test by a West Indies player.

Having set West Indies 282 to win after declaring their second innings on 185 for six at lunch, England looked in with a shout when John Campbell (10), Shamarh Brooks (4) and Nkrumah Bonner (3) all fell cheaply to leave West Indies tottering on 39 for three.

However, captain Joe Root conceded Brathwaite’s enterprise had made the difference, especially after the early wickets.

“It’s easy to look back in hindsight and say ‘could we have pulled out (declared) 10 overs earlier?’ In the end it wouldn’t have made much difference as Kraigg played brilliantly again,” Root said.

“It felt like a new ball wicket. It felt you needed to really make an impact while the ball was hard. We made three brilliant breakthroughs and it was just unfortunate we quite couldn’t kick on. Credit to the West Indies – they fought very hard.”

Resuming the morning at Kensington Oval on 40 without loss, England hunted quick runs through Zak Crawley (40) who extended his opening stand with Alex Lees (24) to 51, and Dan Lawrence who smashed 41 off 39 deliveries with a four and two sixes in adding 36 for the fourth wicket with Ben Stokes (19) and 51 for the fifth with Jonny Bairstow (29).

Starting their innings after lunch, West Indies stumbled when the left-handed Campbell gloved a catch to short leg off Leach, England needing DRS to send the Jamaican on his way in the sixth over with the score on 14

When Bonner was squared up by Saqib and taken by Root at first slip soon afterwards, West Indies were in a spot of bother in desperate need of stability.

It came through the lion-hearted Brathwaite and Blackwood, the latter striking two fours in another measured knock lasting 84 deliveries and 98 minutes, as West Indies reached tea without further loss.

Another stutter came when Blackwood squirted Leach to Bairstow at silly point in the seventh over after the resumption and Jason Holder looped the 24th ball he faced to Lawrence at cover, to fall without scoring at 93 for five.

However, Da Silva struck half-dozen fours in a compact 63-ball knock to help Brathwaite see out the last hour.