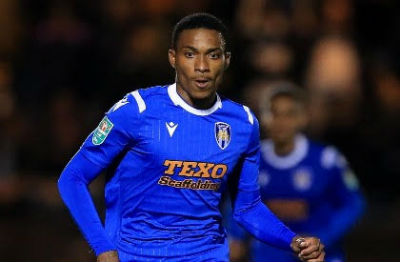 Former Young Reggae Boy Jevani Brown.Brown, 26, who returned to the starting line-up after scoring an 89th consolation goal in a 2-1 defeat last week at leaders Newport County, struck in the 11th, 57th and 81st minutes to seal all three points after Marcus Dinanga had hauled the visitors level in the 15th minute.

In League One, meanwhile, 26-year-old Barbados international Hallam Hope got on the scoresheet in the 10th minute for Swindon Town, but the Wiltshire outfit, reduced to 10 men in first-half injury time, went down 4-2 at Plymouth Argyle and remain just above the relegation zone.

After Stevenage levelled, Brown had the ball in the back of the net again, but the flag had gone up on the far side for Cohen Bramall, who was offside in the build-up.

Colchester got their noses in front again after the break when Brown raced away and coolly slotted home.

Colchester’s third successive home victory lifted them back into the top half of the table.