SILESIA, Poland – Olympic bronze medalist Megan Tapper of Jamaica had to settle for the same color medal in the women’s 110 meters hurdles at the latest World Athletics Continental Tour Gold meeting at Stadion Slaski on Sunday. 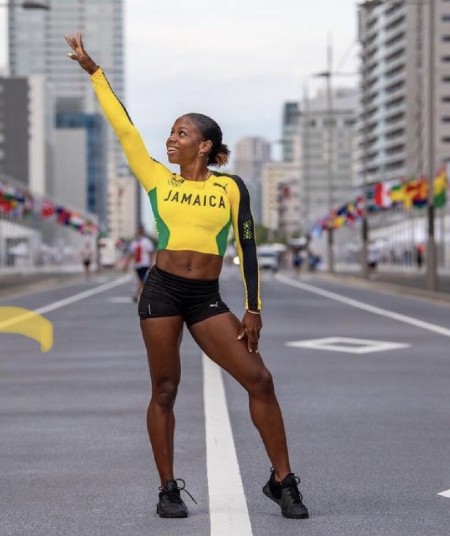 Olympic bronze medalist Megan Tapper of JamaicaTapper clocked 13.03 seconds after Jasmine Camacho-Quinn of the United States showed her class to win with a time of 12.43 (-1.4m/s).

Camacho-Quinn was always in control, despite the efforts of fast improving home heroine Pia Skrzyszowska, whose time was 12.46, and Tapper in the closing stages.

In the shot circle, Tom Walsh made it a Polish double after his win in Bydgoszcz earlier in the week.

The New Zealander also landed a season’s best with a third-round 22.31 meters, and it was 31 centimeters better than what his American rival could muster.

Poland’s Konrad Bukowiecki threw a season’s best of 21.66 for third.

In the pole vault, Chris Nilsen also repeated his victory from Bydgoszcz, clearing 5.92 metres at the second attempt. He attempted a North American record height of 6.07, but fell short.

Frenchman Renaud Lavillenie, the 2012 Olympic champion, and Pal Lillefose of Norway placed second and third with 5.81 each, the former in a season’s best and the latter in a personal best.

The women’s long jump was one of the competitions of the day, with two athletes putting themselves among this year’s leading performers with lifetime bests.

First, Agate de Sousa of Sao Tome & Principe sailed out to a national record of 6.81m (0.5m/s) in the fourth round.

It looked like it was enough to win until the final round when 2017 European Under-20 champion Milica Gardasevic also landed 6.81m (0.2m/s) – and the Serbian’s next best effort of 6.64 was seven centimeters better than de Dousa’s to grab the win.

In a race that brought the crowd to its feet, the women’s one-lap race saw the members of Poland’s 4x400m silver medal winning quartet from the Tokyo Olympics come up against American sprint icon Allyson Felix.

Felix, the most decorated female athlete in history, nosed in front as they turned into the home straight with Poland’s Natalia Kaczmarek and Justyna Swiety-Ersetic either side of her.

It was rising star Kaczmarek who finished the stronger and overhauled Felix to win in 50.40, with the American finishing in a season’s best of 50.71 for second and Swiety-Ersetic also claiming a season’s best with 50.74 in third.