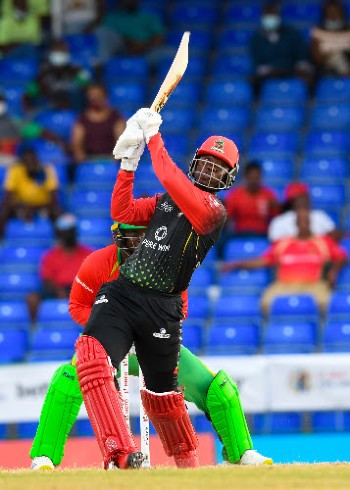 Sherfane Rutherford goes on the attack during his match-winning half-century on Sunday. (Photo courtesy CPl Media)Asked to chase a tricky 167 for their third victory at Warner Park, the hosts overhauled their target with four balls to spare, with the left-hander Rutherford producing a dashing 59 not out off 34 balls against his former franchise.

Entering at number four, the 23-year-old belted a four and half-dozen sixes in a dazzling Man-of-the-Match performance, helping Patriots to gather 54 runs from the last 26 deliveries of the innings.

“It all started from this morning when I woke up with a hunger that whatever position I bat or whatever situation my team is in, I’m going to give it my all to win it,” said Rutherford, who scraped a dismal 39 runs from seven innings for Amazon Warriors last season.

“I had a point to prove so it was good for me to come out here and show what I can do and with a lot of support from my team. I want to say thanks to them for giving me the confidence to go out and play with a free mind.

“After last year I went back to the drawing board. I think I worked very hard coming into this CPL as well because after a bad tournament you don’t want a repeat. So I gave it my all and I know with hard work, there’s always some sort of rewards.”

Mohammad Hafeez had earlier top-scored with 70 off 59 balls while Shimron Hetmyer punched 52 off 35 deliveries as Amazon Warriors racked up 166 for five, after opting to bat.

The 40-year-old Hafeez hit seven fours and a six as he put on 47 for the first wicket with Chandrapaul Hemraj (14), before adding a further 101 for the second wicket with Hetmyer who blasted three fours and three sixes to notch his second fifty of the tournament.

However, in-form openers Devon Thomas (31) and Evin Lewis (30) laid the platform for the successful run chase by posting 69 off 54 deliveries before becoming two of three wickets to tumble for eight runs in the space of 11 deliveries.

For the second time in three matches, however, Rutherford partnered with skipper Dwayne Bravo (22) in a half-century stand, this time adding 72 in a fourth wicket stand to put Patriots in sight of the points.

“We gave their batsman a lot of free hits. In saying that, they batted really good as well but we didn’t execute as a team,” said Amazon Warriors captain Nicholas Pooran.

Rutherford’s half-century was his second in three innings following his 53 in last Thursday’s win over Barbados Royals.