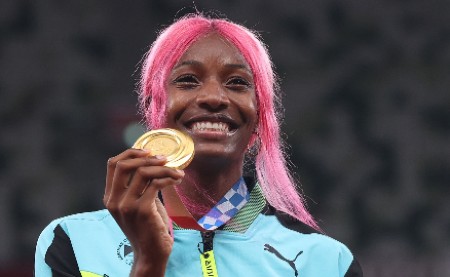 Bahamian Shaunae Miller-Uibo.The 55-year-old Davis-Thompson, a gold medalist at the 2000 Olympics in the 200 and the 4×100 meters relay, said the double by Gardiner and Miller-Uibo meant a lot to the development of young athletes at home.

“It shows that the Bahamas is a very gifted, talented country and if they see what Shaunae and Steven did, they can do it too,” said Davis-Thompson.

Miller-uibo, 27, followed her countryman by storming to victory in the women’s equivalent in a commanding performance that saw her timed at a personal best 48.36.

According to Davis-Thompson, the Tokyo winners served as an inspiration for an entire generation.

“Shaunae and Steven all came through the high school and the club system in the Bahamas,” the legend explained.

“Before Shaunae went off to university, those athletes were able to see them, touch them and feel them and they’re just very excited. These are some exciting times for us in the Bahamas.”

Tokyo represented the ninth straight Olympics in which Bahamian athletes won medals and Davis-Thompson pinpointed the reasons for the ongoing success.

“Diet really matters a lot and I think part of the reason why we’ve been having such success is that a lot of our athletes come from the heart of the ghetto.

“They didn’t grow up with any silver spoon in their mouth. They had to work hard to get where they are.”

With Gardiner and Miller-Uibo now in their athletic prime, the grand dame of Bahamian track and field has predicted more success at the 2022 World Championships in Eugene, Oregon.

“I’m definitely expecting for Shaunae and Stevie to deliver gold again for the Bahamas,” she asserted, while adding 2012 World Under 20 100 and 200 meters champion Anthonique Strachan, and 100 meters hurdlers Pedrya Seymour and Devynne Charlton, to her list of potential stars.